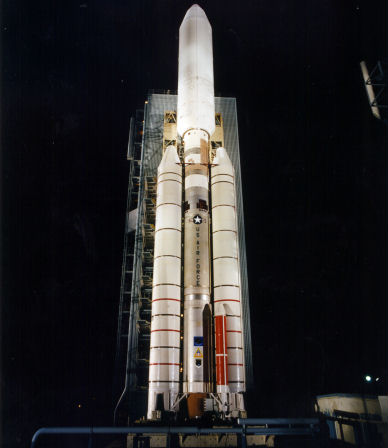 Billed as “assured access to space” by the U.S. Air Force, the Titan IVA was introduced for the specific purpose of carrying large military satellites into space. By the mid-1980’s it became clear that the Space Shuttle fleet could not handle as many military payloads as originally planned. The Titan IVA was intended to supplement the Space Shuttle fleet as conditions warranted. As many as two launches per year were envisioned from Cape Canaveral Launch Complex 41, which was renovated to support the vehicle. Originally referred to simply as Titan IV, the first version of the rocket was renamed Titan IVA to distinguish it from an improved version introduced in 1997 as the Titan IVB. Titan IV development began in 1984 under the U.S. Air Force Complementary Expendable Launch Vehicle (CELV) program. At the time, the CELV program called for a total of 10 launch vehicles which would all employ Centaur third stage boosters.

Initial launch capability for the rocket, at first simply called CELV, was targeted for October, 1988 following U.S. Air Force development approval granted in October, 1984. Full development funding for contractor Martin Marietta was secured by June, 1985. The production contract was modified in 1985 to incorporate a second launch configuration using the existing Inertial Upper Stage (IUS) third stage booster. Originally intended as a back-up launch vehicle for the Space Shuttle to be used only as conditions warranted, the first completed CELV rockets were to be placed in storage until needed. However, the explosion of Space Shuttle Challenger on January 28, 1986 dramatically changed the face of the CELV program. After the tragic loss of Challenger and subsequent stand-down of the Space Shuttle fleet, the U.S. Air Force faced an emergency need for a reliable launch vehicle to carry their large military satellites. In August, 1986, the U.S. Air Force approved a major restructuring of the CELV program, which was officially renamed Titan IV. A total of 23 launch vehicles were ordered. The Titan IV design was also modified to include a two-stage version. This restructure also incorporated the capability of launching polar-orbit Titan IV missions from Vandenberg Air Force Base, California Space Launch Complex-4 East. An overall rate of six Titan IV launches per year was established.

During this post-Challenger restructuring process, NASA decided to abandon development of a powerful wide-body Centaur upper stage which was deemed too hazardous to carry aboard Space Shuttles. Since this version of the Centaur upper stage, once completed, could be launched aboard Titan IV rockets, development of this upper stage was taken over by Martin Marietta under U.S. Air Force supervision. By 1988, additional modifications to the Titan IV program emerged. A decision was made to develop improved solid rocket motors to increase payload capability. These would be phased in after Titan IV launches using existing booster technology had occurred. The U.S. Air Force also decided to purchase an additional 18 rockets, rounding out a planned Titan IV fleet of 41 launch vehicles. This expansion precipitated the renovation of Launch Complex 40 at the Cape, providing a total of three launch sites for the Titan IV. With its first launch on June 14, 1989, the Titan IV fleet began to solidify as a program with five vehicle configurations, three launch sites and a potential mission rate of up to eight launches per year.

Although several military payloads were carried aboard Space Shuttles following their return to flight, a policy decision by the U.S. Air Force dictated that the Space Shuttle would be abandoned as a means of delivering military satellites. This solidified the role of the Titan IV as a vital fixture in military space operations. Like the Commercial Titan III, the Titan IV was based on the Titan 34D. Titan IVA flew with two United Technologies solid rocket motors (SRM). Each seven-segment SRM was 112 feet, 11 inches tall and 10 feet wide. These SRM could produce a combined thrust of 3,200,000 pounds. However, the United Technologies SRM for the Titan IVA were slated to eventually be replaced by new and improved SRM manufactured by Hercules Aerospace Products. The so-called Solid Rocket Motor Upgrade (SRMU) could improve Titan IVA performance by about 25 percent. The SRMU upgrade eventually resulted in the introduction of a new Titan IV variant named Titan IVB. An Aerojet dual chamber first stage engine could produce a thrust of 542,600 pounds. An Aerojet second stage engine was capable of producing a 106,000-pound thrust. Both the first and second stage engines burned Aerozine 50/Nitrogen Tetroxide liquid fuel.

Five distinct versions of the Titan IV were created to handle a broad variety of military payloads and mission objectives. These variants are numbered Versions 401 through 405.

Specifically incorporating the Inertial Upper Stage (IUS) upper stage, Titan IV Version 402 was designed to carry satellites to low-Earth orbit. A standard 56-foot tall payload fairing is employed. The solid-fueled IUS was made up of two separate stages, effectively providing four-stage capability for the Titan IV. The IUS first stage could produce a thrust of 41,600 pounds, while the IUS second stage could produce a thrust of 17,630 pounds. With the United Technologies SRM, Titan IV Version 402 could carry a maximum 38,780-pound payload to low-Earth orbit. This version was launched exclusively from Cape Canaveral.