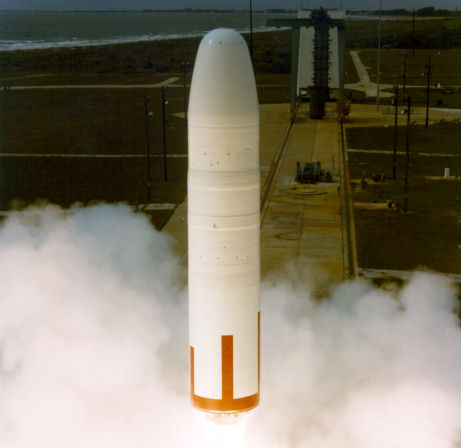 The Trident project was initiated in 1972 to provide a more effective missile than the Poseidon for the U.S. Navy Undersea Long-Range Missile System (ULMS). Originally called “Expo” for “Extended-Range Poseidon”, the Trident I C4 was based upon the Poseidon missile and was designed to be retrofitted to existing Poseidon submarines. As was the case with the Poseidon C3, which is acceptably referred to as Poseidon, the Trident I C4 may be accurately referred to simply as Trident I because only one version of the missile was ever deployed. The Trident I was basically a Poseidon missile with an added third stage and several technical modifications. Although it was designed to be launched in the same fashion as the Poseidon, the Trident I employed an aerospike, or long pointed probe, which extended from the missile’s nose upon first stage ignition. The aerospike was designed to create an inclined shockwave during flight, which resulted in less stress on the missile as well as improved aerodynamic efficiency. The Trident I also added a post-boost propulsion system to help guide the weapons payload to its target. A stellar sensor was incorporated during the post-boost phase to monitor final trajectory. With Lockheed as its prime contractor, the Trident I carried a solid-fueled Thiokol first stage, Hercules second stage and UTC/CSD third stage. Although deployment of the Trident I was extended due to budget problems and certain technical challenges, the missile was declared operational in September, 1982. In addition to being deployed aboard retrofitted Lafayette class submarines, the Trident I precipitated the introduction of a new breed of Fleet Ballistic Missile (FBM) submarines known as the Ohio class. Ohio class submarines incorporate advanced sonar and communications capabilities and can carry up to 24 missiles each, compared to 16 missiles each for the Lafayette class.