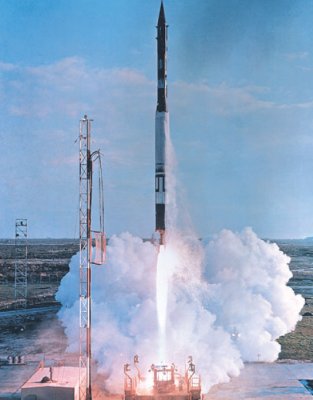 Vanguard was the first U.S. rocket designed for the specific purpose of launching satellites, and represented the first program on Cape Canaveral that was not tied to a weapons system. The rocket was intended to launch the first U.S. satellite, and although it was never able to fulfill this objective, Vanguard remains a vital element in the genesis of the U.S. space program. In March, 1955 the Eisenhower Administration approved a plan to orbit a series of instrumented Earth satellites during the International Geophysical Year (IGY) which extended from July 1, 1957 through December 31, 1958. The IGY was an unprecedented international effort to advance scientific studies of Earth. With U.S. rocket research still in a state of relative infancy, a decision on what sort of rockets and satellites would be launched was delegated to Assistant Secretary of Defense for Research and Development Donald Quarles. Quarles formed the Advisory Group on Special Capabilities to consider available options and render a final determination. This group was nicknamed the Stewart Committee in honor of its chairman, Homer J. Stewart who represented the then Army-sponsored Jet Propulsion Laboratory.

The Stewart Committee was comprised of eight members. Two members represented the Army, two members represented the Navy, two members represented the Air Force and two members were appointed by Quarles. The Stewart Committee began meeting in July, 1955 and was presented with three distinct options. The first, named Project Orbiter, was a joint Army-Navy proposal which would employ a multi-stage version of the Army’s Redstone missile as a booster. The second, ultimately named Vanguard, was a Navy Research Laboratory proposal which would employ a multi-stage version of the Navy’s Viking research rocket as a booster. A third proposal was offered by the Air Force, which would employ its yet-to-be-flown Atlas missile as a booster. On August 3, 1955 the Stewart Committee voted 5 to 2, with one member absent, to select Vanguard to launch a series of IGY satellites. Proponents of Project Orbiter objected bitterly, but the decision of the Stewart Committee was officially endorsed by President Eisenhower and the Department of Defense on September 9, 1955.

Vanguard offered several advantages, including civilian management of booster and satellite development. This reflected a desire of President Eisenhower to distance the military from IGY research efforts. Although the Viking rocket which would provide the core of the Vanguard booster was a product of the Navy, it had been used strictly for scientific purposes. And, Viking was a proven vehicle. On May 24, 1954 a Viking rocket launched from White Sands, New Mexico successfully carried an 852-pound scientific payload to an altitude of 158 miles, considered to be beyond the threshold of space. Although this was not the first time an object had been sent into space, it did validate the Viking as a reliable scientific platform upon which to build the Vanguard program. In addition, Vanguard would not draw resources away from vital ballistic missile research being conducted by the Army and Air Force. The decision of the Stewart Committee has, to an extent, been characterized as a bitter rivalry between the Army and Navy. This is not completely accurate, since the Navy in fact provided vital technical support of Redstone-based Project Orbiter. Also, the 5 to 2 vote of the Stewart Committee was clearly not cast along the political lines of any branch of military service, each of which was equally represented.

The Vanguard rocket emerged as a relatively small three-stage vehicle employing a modified Viking rocket as first stage. The first stage engine, manufactured by General Electric, burned a combination of liquid oxygen and RP-1 (kerosene) liquid fuel and could produce a thrust of 28,000 pounds. An Aerojet second stage engine burned IWFNA/UDMH liquid fuel and could produce a 7,500-pound thrust. A solid-fueled Altair third stage produced a thrust of 3,100 pounds. Prime contractor for the Vanguard rocket was the Martin Company. At least six Vanguard rockets had been scheduled for test launches prior to what would have been the first U.S. attempt to launch a satellite. Since the IGY extended through the end of 1958 and a firm decision in support of Vanguard was made in 1955, it was believed that there was plenty of time for Vanguard to prove itself before attempting the launch of a satellite. However, development problems with Vanguard surfaced quickly, and the first test launch did not occur until December 8, 1956. A second test launch was conducted on May 1, 1957.

Before even a third Vanguard test launch could occur, the Soviet Union shocked the world with their launch of the world’s first artificial satellite, Sputnik I, on October 4, 1957. The third Vanguard test launch was conducted about three weeks later on October 23, 1957. To counter a remarkable and unexpected Soviet achievement, which was followed by their launch of Sputnik II on November 3, 1957 a bold decision was made to attempt a satellite launch aboard the next available Vanguard rocket, a “Test Vehicle” called TV-3. This launch would occur prior to the conclusion of the test series originally intended to validate the Vanguard rocket. TV-3 would be the first Vanguard rocket to fly with powered upper stages, and the success of the mission was doubtful. Vanguard TV-3, carrying a tiny 3.25-pound, 6.4-inch diameter spherical tracking satellite made of aluminum, exploded on Cape Canaveral Launch Pad 18A just seconds after it was launched on December 6, 1957. The first U.S. attempt to launch a satellite had failed dramatically before the eyes of the world. Subsequent troubleshooting of the Vanguard rocket allowed the Army Ballistic Missile Agency (ABMA) to launch the first U.S. satellite, Explorer I, aboard a four-stage version of the Redstone missile on January 31, 1958. The effort allowed the initially rejected Redstone-based Project Orbiter to be vindicated.

Despite the highly publicized Vanguard failure on December 6, 1957 the Vanguard program continued. A second, but less spectacular, Vanguard failure occurred upon a follow-up satellite launch attempt on February 5, 1958. But success would follow. The next Vanguard rocket carried the Vanguard-1 satellite into orbit on March 17, 1958. This was the second U.S. satellite successfully placed in orbit. Vanguard-1 remains the oldest man-made object in space, expected to orbit Earth for about 1,000 years. Like the payload carried aboard the failed Vanguard TV-3, Vanguard-1 was a 3.25-pound, 6.4-inch diameter aluminum tracking satellite. The next four attempts to launch satellites aboard Vanguard rockets failed, but the Vanguard-2 satellite was successfully launched on February 17, 1959. After two more Vanguard failures, the very last launch of a Vanguard rocket scored a success. The Vanguard-3 satellite was successfully launched on September 18, 1959. Both Vanguard-2 and Vanguard-3 were instrumented satellites weighing just over 22 pounds. Although retired after just 14 flights, Vanguard technology was successfully applied to other programs. The rocket’s upper stages formed the basis for upper stage configurations employed on Atlas-Able, Thor-Able and Scout rockets. Vanguard technology even found its way into the NASA Apollo program, with a modified Vanguard upper stage forming the basis of the Atlas-Antares second stage. Atlas-Antares was used in NASA Project Fire to test proposed Apollo re-entry vehicle designs. 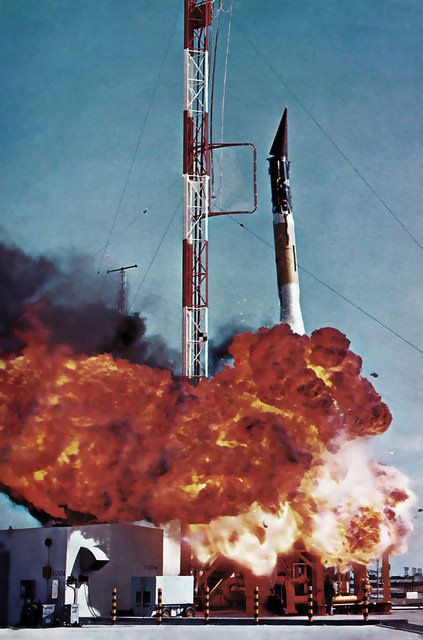