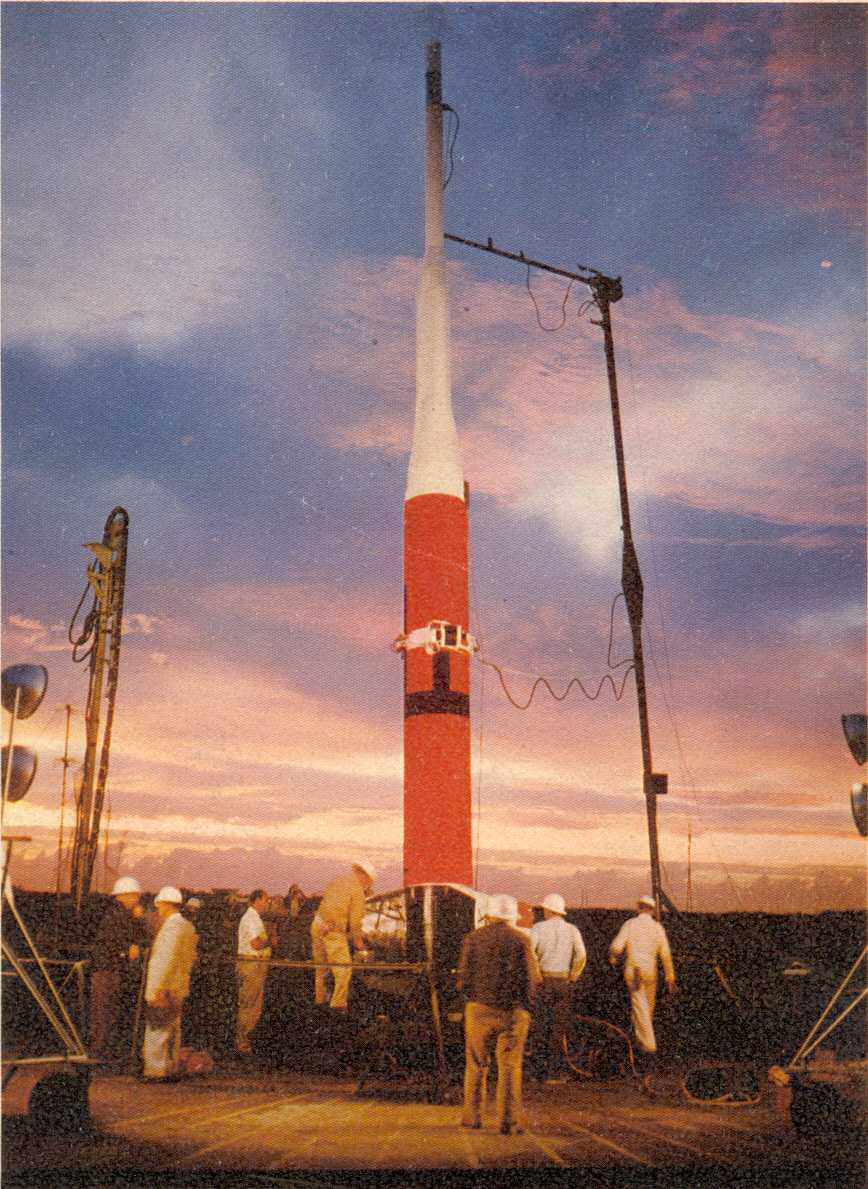 Although relatively short-lived, the X-17 research rocket played a vital role in U.S. ballistic missile and nuclear weapons development. The X-17 program was born in 1954 as military officials realized that no hard data was available on how missile nose cones would react during high-speed re-entry through Earth’s atmosphere. At a time when ICBM development was about to reach fever pitch, a research rocket was needed to help determine the best shape, size and aerodynamic characteristics of re-entry vehicles which would be used to deliver a nuclear weapons payload to its target. The U.S. Air Force granted a contract to Lockheed in January, 1955 to develop a rocket capable of gathering data on nose cone performance during actual flight conditions. Development of the resulting X-17 rocket occurred very quickly. On May 8, 1955 the first of three 1/4-scale versions of the X-17 was delivered to Cape Canaveral for flight testing.

These 1/4-scale vehicles were used to test flight support hardware as well as anticipate aerodynamic performance of the proposed full-scale version of the X-17. With the “Q” standing for “Quarter”, the 1/4-scale versions of the X-17 were named Q-1, Q-2 and Q-3. Q-1 and Q-2 each employed a solid-fueled rocket as a first stage and carried non-separable wooden dummy second and third stages. Q-1 and Q-2 were both launched on May 23, 1955. While very little data was acquired during these flights, the X-17 support team did gain necessary operational experience. Q-3 employed a solid-fueled rocket as a first stage which could actually separate from its two dummy upper stages. Designed to achieve this separation in actual flight conditions, Q-3 exploded just three seconds after its launch on June 13, 1955. These 1/4-scale flights were followed by a series of test launches featuring three 1/2-scale versions off the X-17. These flights were intended to verify data acquired during the 1/4-scale tests.

Numbered H-1, H-2 and H-3, with the “H” standing for “Half”, all three 1/2-scale versions of the X-17 employed a solid-fueled rocket as a first stage, three solid-fueled NOTS rockets as a second stage and a single solid-fueled NOTS rocket as a third stage. H-1, H-2 and H-3 were launched on June 23, 1955, June 30, 1955 and July 14, 1955, respectively. Stability of these 1/2-scale rockets was very poor during flight, and each one reached less than half of the velocity anticipated. Nevertheless, enough data was acquired during the 1/4-scale and 1/2-scale X-17 test flights to justify pressing ahead with test flights of the full-scale version. A series of full-scale developmental flights was planned to test, and if necessary correct, overall X-17 vehicle performance prior to the start of operational research missions.

The first six full-scale versions of the X-17 were numbered D-1 through D-6, with the “D” standing for “Development”. All of the X-17 rockets which followed were numbered beginning with R-1, with the “R” standing for “Research”. Test flights of the developmental versions of the full-scale X-17 began on August 26, 1955 and concluded on June 26, 1956. Early in this series, problems were encountered regarding second and third stage performance. These problems were ironed out through component testing at Holloman Air Force Base, New Mexico. As a precautionary measure, a decision was made to use the first scheduled operational research version of the X-17, called R-1, for a developmental test flight on April 17, 1956. Operational research flights of the X-17 began on July 17, 1956 with the launch of rocket R-2.

The full-scale X-17 employed three solid-fueled stages. The first stage was powered by a Thiokol Sergeant rocket which could produce a thrust of 48,000 pounds. The second stage employed three Thiokol Recruit rockets which could each produce a thrust of 33,900 pounds. The third stage was powered by a single Thiokol Recruit rocket which could produce a 35,950-pound thrust by utilizing an enlarged exhaust nozzle. Two small solid-fueled spin-stabilization motors were strapped to the first stage. Ignited at launch, these motors were jettisoned just a few seconds later. X-17 rockets were transported to the launch site on a specially designed trailer/erector. After the rocket was elevated to a vertical launch position by two hydraulic actuators, the trailer was removed.

The first stage of the X-17 carried the rocket to an altitude of about 90,000 feet before expending its fuel and shutting down. Using its own momentum, the X-17 continued to a maximum altitude of about 500,000 feet. Once peak altitude was reached, the X-17 began an uncontrolled fall toward Earth. At an altitude between 90,000 feet and 70,000 feet, a pressure sensor located on the X-17 fins activated an explosive device which separated the rocket’s first stage. About a second later, the second stage was fired. It burned less than two seconds prior to ignition of the third stage, which also burned less than two seconds. Despite these short bursts, tremendous speed was achieved during this re-entry process. Speeds approaching 10,000 m.p.h. were reached during the flight of an X-17, which typically lasted six minutes and covered a distance of about 135 miles.

During re-entry, valuable data was transmitted from test nose cones regarding temperature, pressure and flight dynamics. X-17 rockets flew with nose cones of differing shapes, including hemisphere, cubic paraboloid and blunt. A total of 25 operational research X-17 flights were conducted through July 22, 1957. Results of these flights were mixed, but the X-17 served the pivotal role of determining that blunt nose cones provided the best shape for use on both the Atlas and Titan ICBM. In 1958, seven additional X-17 rockets were manufactured for Project Argus, an ambitious program conducted to detonate nuclear weapons payloads at altitudes greater than 300 miles. X-17 rockets used for Project Argus were specially modified for this task. Project Argus launches of X-17 rockets were conducted from the ship U.S.S. Norton Sound in the summer and fall of 1958. Four test launches occurred off San Clemente, California. These were followed by three live nuclear detonations over the South Pacific.