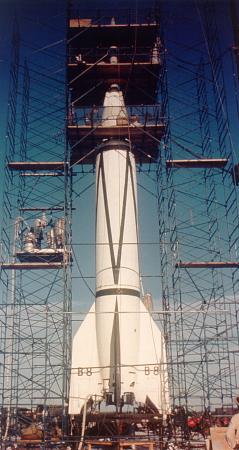 Although Launch Pads 1, 2, 3 and 4 and their associated support buildings were barely under construction, the Army scheduled launches of two modified German V-2 rockets for July, 1950. The rockets were called Bumper, and each employed a V-2 rocket as first stage and a Without Any Control (WAC)-Corporal rocket as second stage. Six Bumper flights were conducted at White Sands, New Mexico but the last two Bumper flights, designated Bumper #7 and Bumper #8, required a longer range. These flights were intended to test rocket stage separation during near horizontal rocket flight, a precursor to long range ballistic missile testing. The tests required about 75 miles of range more than was available at White Sands. Construction of permanent access roads and facilities at the initial launch area was slow at times due to transportation difficulties. Heavy trucks often became bogged down in sand. There remain large underground piles of cement in the vicinity of Launch Pads 1, 2, 3 and 4. Cement trucks often had to dump their loads prematurely after becoming stuck in the sand.

A series of underground access tunnels and equipment rooms were constructed inside a large compartmentalized cement “box” which filled the hole at the site of the launch pad. When this structure was completed, the area surrounding it was backfilled with sand. A permanent reinforced concrete launch pad measuring 98 feet by 96.5 feet was then poured as a “cover” for the underground structure. The launch pad incorporated an elaborate water deluge system built into curbed areas bordering the concrete launch pad, as well as a catch basin to trap any liquid fuel that might spill. Sufficient electrical generators and water supplies, including a man-made water retention pond and back-up water supply housed in a water tank, were available on site. Electrical generators and other equipment was housed in the underground tunnels and rooms, which were accessible from the launch pad via stainless steel hatches built flush into the surface of the launch pad itself.

Although a permanent blockhouse for Launch Pad 3 had yet to be completed, a small wooden building was built to stand on a cement slab measuring about 20 feet by 20 feet. This building was located about 500 feet distant of the launch pad to accommodate the firing crew and support personnel. Although Cape lore suggests this temporary blockhouse was a converted bathhouse or a “tarpaper shack”, the building was in fact constructed from scratch by the Army. It was built mainly of wood, lined on the outside with a grayish silver felt material designed to reflect sunlight to aid in cooling the interior. A mirror-type reflective window allowed occupants to view the launch while remaining lower than surface level inside the building, which was protected about halfway up the outside walls by a sand embankment reinforced with about 5,000 sandbags.

Eyewitnesses to the Bumper launches agree that this building would not have provided adequate protection if one of the rockets had exploded nearby. This is perhaps best exemplified by the fact that a number of people were positioned in foxhole-type trenches nearby, with photographers and other people stationed at surface level outside the blockhouse. The blockhouse did, however, provide adequate weather protection for personnel and equipment as needed. This temporary blockhouse was dismantled about a year after the Bumper launches. The concrete slab upon which the temporary blockhouse stood was visible in aerial photos of Cape Canaveral for many years afterward, until the area became overgrown with vegetation. The concrete slab was rediscovered in 1998 by volunteers with the Air Force Space and Missile Museum at Cape Canaveral Air Force Station, and is being preserved in memory of its role in Cape history.

Although a tank was used as a firing room for Lark missile launches in the vicinity of Launch Pad 3 in subsequent months, a tank was not involved in the Bumper rocket launches. The Bumper first stage was fueled directly from fuel trucks, and the second stage fuel was poured from drums hoisted to the top of the rocket. The Bumper rockets themselves were erected atop a steel firing table on the concrete launch pad. The Bumper rockets were serviced from what was in essence the first mobile service tower on Cape Canaveral. The Army constructed the service tower on site out of paint scaffolding purchased in the Orlando, Florida area. The structure was built on wheels, and was manually pushed to and from the rocket prior to launch. A pine telephone pole served as an umbilical tower. Army-issue mattresses were used to catch the umbilical connections as they fell away from the rocket at launch – a novel way to keep hardware from becoming damaged.

Offshore tracking of the rockets was supported by Navy ships. Telemetry and communications support on Cape Canaveral was provided by equipment and personnel housed in temporary trailers or trucks. Support was also provided by special towers and antennas erected near, and in some cases on, the Cape Canaveral Lighthouse. Support for personnel at the Bumper launches was in many cases primitive. The majority of Army personnel were housed in tents and were at the mercy of the elements, including extreme heat and humidity. Clouds of mosquitoes and large quantities of rattlesnakes and alligators abounded. Luckier personnel were housed at the Long Range Proving Ground Base or even the nearby DeSoto Beach hotel. In the days leading up to the Bumper launches, even some personnel who resided full time in the local area were required to live in tents near the launch pad. This was because the Army did not have enough personnel to work in multiple shifts. Having personnel available at the launch site expedited work and aided in security. Bumper veterans concur that most support personnel, even those living permanently in the Cape area, lived in tents near the launch site for as much as two weeks prior to the end of the Bumper series.

Bumper #7 was scheduled for launch on July 19, 1950. The rocket misfired on the launch pad. As a result, on July 24, 1950 Bumper #8 became the first rocket launched from Cape Canaveral. Launch of Bumper #7 followed on July 29, 1950. These launches successfully demonstrated the feasibility of near-horizontal liquid fuel rocket staging, and the Bumper #7 second stage achieved the highest speed of any man-made object to date. Maximum range of these Bumper flights was about 150 miles. Although seemingly insignificant by modern standards, the stage was thus set for many milestones to come, with the range of Cape-launched rockets ultimately extended to send men to the Moon and spacecraft to the outer reaches of the solar system. Today, the original Launch Pad 3 is in a remarkably preserved state, although the underground tunnels and equipment rooms, still accessible by at least one of the original surface hatches, have long since filled up with water of a level which varies depending on local weather conditions. The surface of the pad contains scars from several bygone missile programs, but almost unbelievably the outline of the original Bumper firing table is still clearly visible.