In Memory Of Norris “Chief” Gray 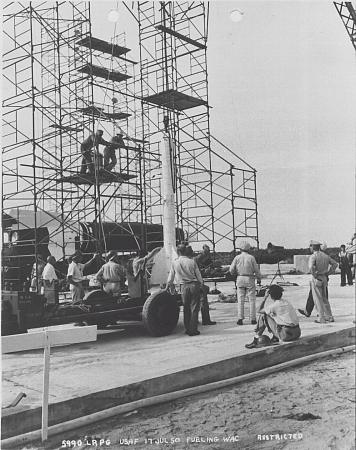 July 24, 2000 marks one of the most significant anniversaries in the distinguished history of Cape Canaveral. This is the 50th anniversary of the first rocket launch from the Cape, that of Bumper #8, launched on July 24, 1950. I have spent the last three years extensively researching that eventful day and have been saddened to see how many false accounts have been published based upon Cape folklore and myth. In many instances, authors have been well meaning but misinformed.

“In a clearing, made by burning the underbrush and uprooting the palmettos with bulldozers, construction workers completed a concrete pad on 20 June 1950. They also cleared all land within 1.6 kilometers of the pad. Few pictures reflect the state of American rocketry in 1950 so accurately as the first launch pad at Cape Canaveral. It was a 30-meter-wide layer of concrete, poured on top of sandy soil a little more than a kilometer north of the lighthouse. The primitive space port was inaugurated 19 July 1950 by Bumper 7.” (Benson and Faherty, Moonport, A History of Apollo Launch Facilities and Operations, NASA SP-4204, NASA Scientific and Technical Information Office, Washington, 1978, Pages 4 and 6)

“The facilities were hardly impressive. The blockhouse was thrown together in a mad rush, and was completed in the form of thick wooden beams and ponderous walls of sandbags. The workstands (two were built) resembled nothing so much as a plumber’s nightmare. Only where the missile stood was there concrete.” (Martin Caidin, Spaceport USA, E.P. Dutton and Company, New York, 1959, Pages 105 and 106)

“The first rocket, a combination of a German V-2 and a United States WAC Corporal, was launched in great secrecy from a makeshift pad on the south side of the Cape.” (William Roy Shelton, American Space Exploration, the First Decade, Little, Brown and Company, Boston, 1967, Page 12)

“The first launch from Cape Canaveral, July 24, 1950. The modified German V-2 rocket attained an altitude of 10 miles. Note the primitive facilities. A tarpaper shack served as a blockhouse. The pad service structure was made from painter’s scaffolding.” (America’s Spaceport, NASA, Uncredited and Undated, Photo Caption, Page 4)

Lest you believe I am being too critical of other works, consider the following quote from a piece I myself wrote a couple of years ago:

Has a common theme emerged?

Without exception, all of the written accounts I have seen depict Launch Pad 3, the site of the first rocket launch from Cape Canaveral, as a crude, makeshift facility thrown together in haste at the last minute.

As documented above, I myself had believed this for many years. That is, until January, 1998.

I am privileged to include in my list of friends an infectiously enthusiastic man named Norris Gray. Norris, known among Cape folks by his nickname “Chief Gray”, was in charge of fire safety at the Cape beginning in 1949. He faithfully served the Air Force, and eventually NASA, in that capacity until his retirement in 1984.

During one of my many encounters with Norris, I learned that he was at the launch pad for the launch of Bumper #8, and had in fact received a commendation for the safing of Bumper #7, which misfired on the pad on July 19, 1950.

In January, 1998 I arranged a meeting at Launch Pad 3, site of the first launch from Cape Canaveral, with Norris, myself, and fellow Air Force Space and Missile Museum volunteers Al Hartmann and Johnnie Johnson. This was purely out of curiosity on my part and on the part of Norris, who had not visited the site in over 40 years.

I wanted to see if Norris recognized any landmarks that exist at Launch Pad 3 today. Well, did he ever. Norris walked out onto the concrete Launch Pad 3 as it exists today. In less than 30 seconds, he shouted, “Here it is!”

He pointed to a small, symmetrical gray stain on the concrete. He said, “This is the outline of the V-2 launch table. We launched Bumper from right here.” He then pointed out several other landmarks that would have been overlooked by anyone but a man with his expertise.

My immediate response was incredulous. I told Norris that he was mistaken. These couldn’t be original Bumper-related landmarks, because this wasn’t the original launch pad. I told him that all of the written accounts said the Bumper rockets were launched from a temporary concrete slab, and what’s there now definitely was not intended to be temporary.

He smiled and remarked, “You can believe anything you want to. I’m just telling you I was here for the launches, and this is definitely the same pad.”

That was good enough for me. On that day, Air Force Space and Missile Museum volunteers Al Hartmann, Gary Harris, Roger McCormick and myself embarked on a wonderful, yet difficult and time consuming journey, to prove beyond the shadow of a doubt that Norris Gray was right and everybody else was wrong. And we have been successful.

On July 24, 1950 Launch Pad 3 was neither primitive nor makeshift. It was in fact a remarkable engineering achievement in its day, incorporating among other features underground equipment rooms and an elaborate water deluge system built into the concrete pad. And, the pad has survived intact for the past 50 years.