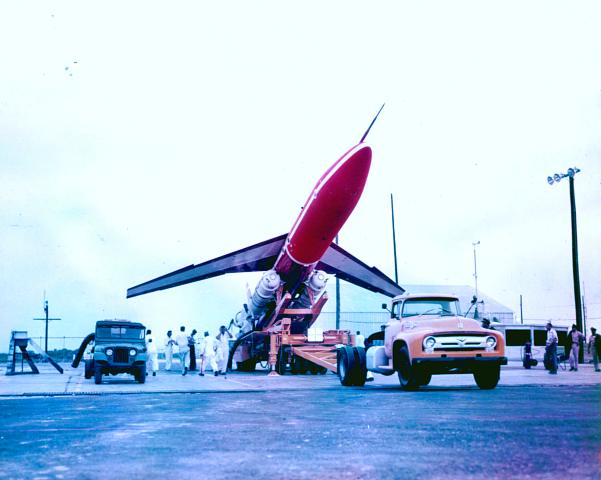 As post-war development of missile weapons progressed, a site became necessary to develop tactics and techniques for guided missile operations, train personnel, test equipment used to operate the missiles and conduct functional and tactical tests of new guided missiles to determine their effectiveness.

A suitable facility would need to be relatively isolated from centers of population, provide a large expanse of unpopulated area over which missiles could fly and accommodate the installation of several downrange tracking stations. A base for military operational headquarters would also be required.

Although a missile range had been in operation at White Sands, New Mexico since the close of World War II, this range was only 135 miles long and was perilously close to populated areas. It proved to be too short for newer, more powerful missiles and too risky to support more advanced research and development tests.

The dangers of a missile range so close to populated areas would become painfully clear in May, 1947 when a V-2 rocket strayed to the south instead of heading north over the White Sands range. The missile flew directly over El Paso, Texas and eventually crashed into the Tepeyac Cemetery in Juarez, Mexico.

The missile impact created a hole 50 feet wide by 30 feet deep. Although no one was injured, the U.S. government caused a minor international incident and had to settle damage claims, many of which were obviously embellished by the local residents. Thankfully, the quest for a new missile range had begun almost a year before this incident.

In October, 1946 the Joint Research and Development Board under the Joint Chiefs of Staff established the Committee on the Long Range Proving Ground to analyze possible locations for a new missile range to be shared by the various branches of the military.

In September, 1947 the Committee on the Long Range Proving Ground announced its decision to recommend the establishment of a missile proving ground at the California site, with Cape Canaveral offered as the second choice. The Washington site had been quickly rejected due to its isolation and poor weather.

The Air Force was notified by the recently established Department of Defense on December 30, 1947 that since a long range missile proving ground was intended to benefit the Army, Navy and Air Force, management of the project would be reassigned.

Although it would have been a suitable site very close to existing missile manufacturers, the California site had to be rejected when Mexican President Miguel Aleman refused to agree to allow missiles to fly over the Baja region. This was largely a result of bad timing, since a wayward V-2 rocket launched from White Sands, New Mexico had recently crashed near Juarez, Mexico.

The British, however, were quick to express their willingness to allow missiles to fly over the Bahamas. They also were willing to lease island land to the U.S. military for the establishment of tracking stations. That, coupled with inherent strengths of Cape Canaveral, sealed its selection as the first U.S. long range missile proving ground.

The Missile Test Range At Cape Canaveral Is Approved

The very traits that kept large numbers of settlers away from Cape Canaveral now made it a perfect site for the establishment of a missile range. Covering 15,000 acres, the Cape was relatively isolated from heavily populated areas, but it was accessible by road, rail and shipping. The weather was also favorable most of the year.

The unique location of Cape Canaveral provided a huge over-water flight area removed from populated land masses and shipping lanes, as well as accessible West Indies and South Atlantic island sites for the installation of optical and radar tracking stations.

Cape Canaveral also was located near the Equator, which would prove to be an asset in ballistic missile testing and eventually space launches. Rockets launched from the Cape could take advantage of the rotational speed of the Earth, which is greatest at the Equator. The relative position of Cape Canaveral required less rocket engine thrust than would have been necessary elsewhere.

The additional fact that the Banana River Naval Air Station was available for occupation as headquarters just 15 miles south of Cape Canaveral caused military leaders to push ahead with the development of a missile range in Florida.

The Military Moves Onto Cape Canaveral

But more land was needed, and the U.S. government began condemning and purchasing private property on Cape Canaveral. Some of the local residents complied quickly, but some stayed in their homes even after the military assumed residence, preferring to wait until the courts exhausted their appeals to remain on their property.

About two dozen residents remained in the area around DeSoto Beach after the military assumed residence on the Cape. These individuals were temporarily removed from Cape Canaveral by bus and housed at the Brevard Hotel in the city of Cocoa during hazardous launch operations near their homes, which were very close to the first launch pads on the Cape.

Eventually, all of the remaining families were removed by action of the courts and the military assumed sole occupancy of Cape Canaveral. Many of the existing homes and buildings were converted into storage areas and offices. The hotel at DeSoto Beach housed the first headquarters building on Cape Canaveral.

Although all of the original buildings located on Cape Canaveral at the time the military assumed residency have long since vanished, surviving remnants of the first Cape residents include numerous preserved grave sites, scattered orange groves, gardens and of course the historic Cape Canaveral Lighthouse.

On May 9, 1950 work began under a contract between the Army Corps of Engineers and Duval Engineering Company of Jacksonville, Florida to construct new roads and launch sites on Cape Canaveral. The first area developed for launch operations became known as Launch Pads 1, 2, 3 and 4.

Construction of instrumentation sites and missile handling areas on the Cape was also begun. Initially, military offices were established in existing buildings on Cape Canaveral itself, including abandoned homes. Prior to the completion of a runway and missile handling areas on the Cape, missile hardware was received and handled at the Joint Long Range Proving Ground Base, then trucked to Cape Canaveral for launch.

Although the entire facility was initiated under the cooperative management of the Army, Navy and Air Force, the Air Force soon assumed control of operations at Cape Canaveral and the island tracking stations by directive of the Department of Defense.

Under the direction of the Army Corps of Engineers, the construction of Port Canaveral at the southern end of Cape Canaveral was begun in July, 1950. The deep water port was originally intended to allow the berthing of range instrumentation and cargo ships, but was later expanded to service ballistic missile submarines and commercial vessels.

On July 21, 1950 the Bahamian Agreement was signed with the British government to allow construction of the first island tracking stations. The range of tracking stations eventually stretched across the Atlantic Ocean, South Africa and into the Indian Ocean.

Although Launch Pads 1, 2, 3 and 4 and their associated support buildings were not all fully completed, the Army scheduled launches of two modified German V-2 rockets for July, 1950. The rockets were called Bumper, and each employed a V-2 rocket as first stage and a Without Any Control (WAC)-Corporal rocket as second stage. The first rocket launch from Cape Canaveral, that of Bumper #8, occurred on July 24, 1950.

A few days after the historic Bumper launches from the Cape, the Long Range Proving Ground Base received the name it holds today. It was renamed Patrick Air Force Base in honor of Major General Mason M. Patrick on August 1, 1950.

On June 30, 1951 the Long Range Proving Ground Division was redesignated the Air Force Missile Test Center and the range was renamed the Florida Missile Test Range.

With a basic infrastructure firmly established, Cape Canaveral began to grow rapidly. Although initially expected to only encompass Launch Pads 1, 2, 3 and 4 for the testing of Air Force winged missiles, the introduction of ballistic missiles caused operations at the Cape to expand rapidly.

Initially, Air Force personnel manned all of the range support positions. However, an analysis determined that Cape Canaveral operations would be more cost-effective if broad functions were turned over to commercial contractors.

On February 28, 1954 Pan American World Airways signed its own sub-contract with RCA for the technical functions of operating and maintaining the range instrumentation systems. This included missile flight data processing, tracking instrumentation and communication links between the launch sites and downrange tracking stations.

On June 3, 1954 Cape Canaveral supported the first attempted recovery of a winged missile that flew a programmed pattern and then returned to the Cape for refurbishing and reuse. A Snark missile was successfully guided for landing on the Cape Canaveral Skid Strip, but the missile’s skids failed and the vehicle crashed and exploded upon contact.

The Cape Canaveral Skid Strip still bears its name. It originated as a long strip intended to support landings of Snark missiles, which employed metal skid plates but no traditional landing gear. Hence, the Cape landing strip was nicknamed the Cape Canaveral Skid Strip, because Snark missiles skidded to a stop after landing. A large number were successfully recovered this way.

The Cape Canaveral Skid Strip was eventually modified for other purposes. On February 3, 1956 a Navaho X-10 missile was successfully launched from and recovered on the skid strip. The Navaho X-10 was a test version of the Navaho XSM-64 and employed landing gear similar to that used on aircraft. It was launched, flew and landed much like a traditional aircraft.

From that time onward, the Cape Canaveral Skid Strip has fulfilled a vital role in the shipping and receiving of rocket parts and supplies for Cape operations, as well as the transport of personnel. Training of military paratroopers is also routinely conducted there.

More Name Changes For Cape Canaveral And The Range

On December 16, 1955 Cape Canaveral Auxiliary Air Force Base was redesignated the Cape Canaveral Missile Test Annex (CCMTA). The Cape would hold this name until a controversial name change was in store. In May, 1958 the Florida Missile Test Range was renamed the Atlantic Missile Range.

On July 9, 1958 the Cape experienced its first operational fatality. On that day, Fred D. Adams fell from an Atlas missile service tower and died as a result of injuries sustained.

Although this was a great loss for all involved, fatalities on the Cape have been few and far between. Specific records on fatalities are not available for review, but it is estimated that less than 20 people have died as a result of operational activities at the Cape.

This number does not include those who may have died in automobile accidents on government property, but anyone would agree that given the volatile nature of rocket and missile launches, the number of operational fatalities has been remarkably low.