HISTORY OF THE CAPE CANAVERAL LIGHTHOUSE 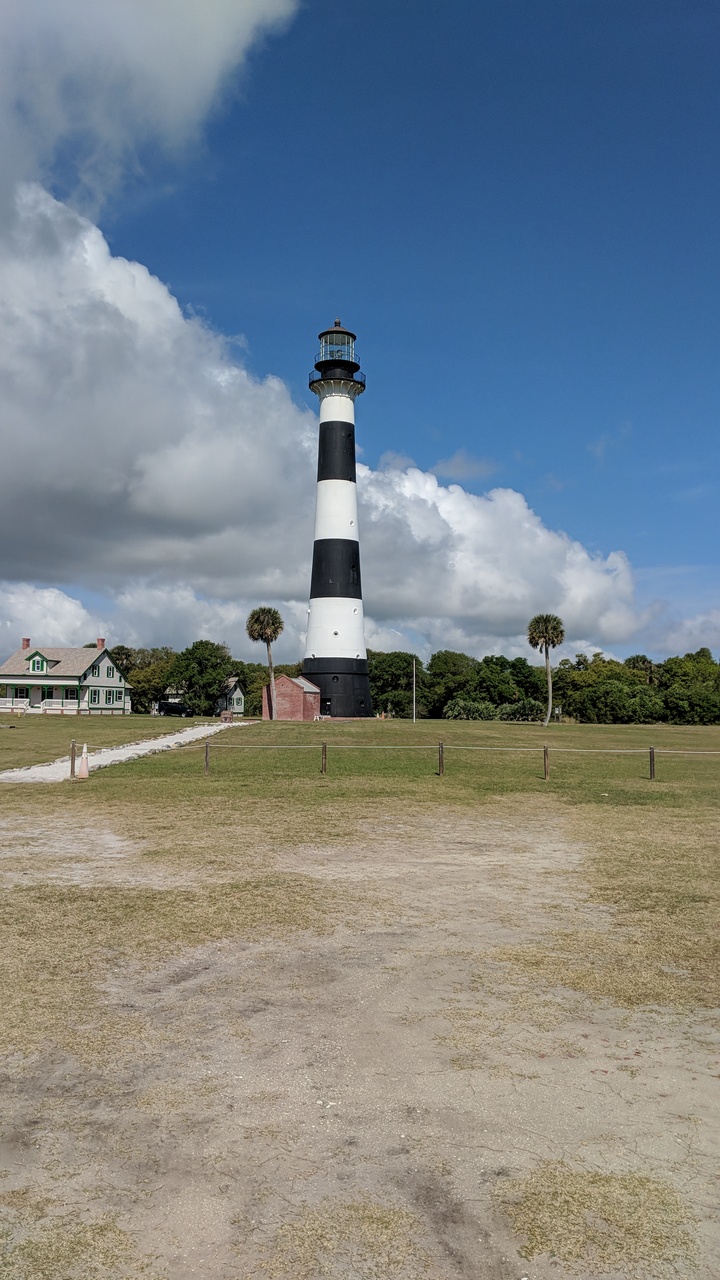 For an untold number of years Cape Canaveral was a focal point of navigation for ships, but by dead reckoning and visual sighting only. The relatively shallow water near the Cape Canaveral coastline provided great hazard to ships, many of which either ran aground or were shipwrecked as a result. In 1836 a consortium of shipping interests requested that the United States government erect a lighthouse on Cape Canaveral to aid in coastal navigation and protect mariners.

A lighthouse made of brick and stone was erected very close to the shoreline about a mile northeast of the current lighthouse, just a few yards north of what is present day Launch Complex 46. This lighthouse was 65 feet tall. In its day and on a clear night the light could be seen almost 10 miles offshore and provided adequate warning of shallow waters. However the shallow water, on average of 15 feet in depth, extends about 13 miles offshore so in some respects the old lighthouse was inadequate. By 1859 a decision was made to erect a taller lighthouse, and the Cape’s historic lighthouse was born.

The West Point Foundry of Cold Springs, New York, was granted a contract to build the new lighthouse. A total of 19 companies bid on the project, but the West Point Foundry submitted the lowest bid, that of a whopping $28,000, about $690,000 in today’s currency. In a “Civil Engineer and Architect’s Journal” magazine published in London in May and June, 1862 and currently residing in the Spaceline archives, an amazing article entitled “New Iron Lighthouse at Cape Canaveral, Florida, U.S., America” includes exhaustive details on plans for the lighthouse with blueprints and diagrams. Erection of the lighthouse on Cape Canaveral was delayed by the Civil War and other factors but it was finally erected on the shoreline about 95 feet south of the existing lighthouse in 1868.

The lighthouse was forged in sections out of cast iron and delivered by ship to the Cape. As the erosion of the shoreline became a grave concern the lighthouse was disassembled and the sections were moved by wagon along a temporary tram road between the shoreline location and its current resting place about a mile inland. It is somewhat interesting to note that a single mule provided the locomotion for the lighthouse move. The mule was named “Nancy” apparently after President Abraham Lincoln’s mother Nancy Hanks. The lighthouse move and reassembly was completed in 1894, with the first light from its top occurring at precisely 6:58 p.m. on July 25, 1894.

The lighthouse is 151 feet tall and contains 167 steps from its interior base to the height of its lamp room. It has five interior floors that are accessible by the stairway. It was uniquely designed to be protected from water submersion up to as high as the third floor, and in fact grease was applied between the iron elements to aid in waterproofing. There is only one recorded instance during which parts of the lighthouse were submerged, and this was during a hurricane when it was still located on its shoreline location, never where it stands today.

There is currently a large doorway at the base of the lighthouse which was incorporated later and did not provide access to the interior. Originally the only access was given through an exterior spiral staircase which led to an entrance door to the third floor. The door at ground level was introduced in 1929 as the lighting mechanism was transitioned to electric generator rather than the original kerosene lighting. In 1931 the electric lighting mechanism was officially introduced. The original Fresnel lens was replaced in 1993 and the original lens was refurbished and sent to the Ponce de Leon Inlet Lighthouse Museum, where it is currently on display.

The top of the lighthouse was also replaced and the original fixture was converted into a gazebo display near the parking lot of the Air Force Space and Missile Museum on the Cape. The light of the famous lighthouse is currently lit every night and flashes twice every 20 seconds and is visible up to 24 miles offshore, still providing much needed protection from the shallow offshore waters. The light is currently powered by a modern dual rotating Carlisle and Finch DCB-224 unit featuring a 2-foot diameter lens.

The diameter of the lighthouse is 28 feet at its base and first floor narrowing to 12 feet at its top. The second floor was designed to house the lighthouse keeper and his family. It includes a master bedroom and kitchen. There are a series of holes in the floor which allowed air to circulate through the interior of the lighthouse. The ambient heat inside the lighthouse made living inside unbearable, especially in the hot and humid summer months. For that reason beginning in 1848 the lighthouse personnel were housed in homes adjacent to it. In 1967 these buildings were demolished due to deterioration. Currently the Cape Canaveral Lighthouse Foundation has already, and continues to, rebuild these structures using original blueprints.

The third floor was originally intended to be the lighthouse entrance and includes a living room area atop the living facilities located on the second floor below it. In 1933 radio and weather equipment were installed on the third floor to aid mariners by supporting a radio beacon which told ships which lighthouse it was, which aided in successful navigation offshore. The fourth floor was intended for use for extra bedrooms and storage. The fifth floor provided access to the lighting mechanism above.