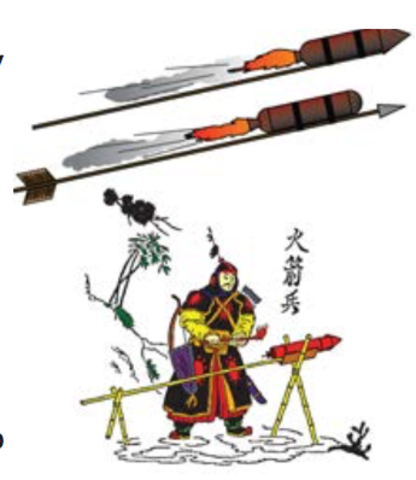 The Roots Of Rocketry

Historians believe that armies began hurling combustible weapons toward one another as early as 1,000 B.C. At the time, fire pots were used to set fires. Fire pots were simply pots containing flammable materials like naphtha that were ignited and hurled by various mechanical devices.

The concept was simple, yet effective as fire pots were able to be easily deployed and could set fires over fairly large areas. Still, these were not rockets in the traditional sense.

The Reaction Principle Is First Demonstrated

Although the exact date remains a mystery, it is believed that the reaction principle was first demonstrated about 360 B.C. by a Greek named Archytas.

Far from demonstrating the reaction principle in a weapon, Archytas simply filled a hollow clay pigeon with water. He then suspended the clay pigeon by string over a fire.

The heating of the water produced steam, and the clay pigeon could move under its own power as steam escaped through strategically placed holes. Archytas could hardly have imagined that the same basic principle would one day carry men to the Moon.

By about 200 B.C. it is believed that the Chinese mastered the mixing and use of gunpowder. Known as black powder until the invention of guns, gunpowder would prove to be the primary ingredient of the first true ballistic rockets.

The Chinese created the first gunpowder through the traditional mixing of charcoal, saltpeter and sulphur. While rocketry was still a long way away, the explosive nature of gunpowder was well demonstrated by the Chinese through the loading and detonation of firecrackers.

As the Chinese continued to experiment with gunpowder, a second primitive demonstration of the reaction principle surfaced in Alexandria. Historians believe that some time in the first century A.D. the aeolopile was invented.

The aeolopile, or reaction wheel, was a primitive version of the steam turbine first demonstrated by the Alexandrian Hero. Although no practical use of the aeolopile was found at the time, it was an oddity similar to the clay pot of Archytas.

Simply a hollow globe pivoted to turn on two central trunions, the aeolopile was able to rotate when steam passed through internal tubes.

The Chinese Adapt Gunpowder To Fireworks

Although the date of their introduction is uncertain, writings indicate that in 994 A.D. the Chinese used fire arrows in battle. Fire arrows were traditional arrows tipped with flammable materials like pitch, bitumen or resin.

In 994 A.D. the Chinese city of Tzu T’ung was attacked by an army of 100,000 men. The commander of the defensive forces, named Chang Yung, ordered a response to the attack using artillery fire made up of catapulted stones and fire arrows launched by bows.

In 1045, a Chinese government official named Tseng Kung-Liang wrote a complete account of the Chinese use of gunpowder, including its adaptation to weaponry.

Called “Wu-ching Tsung-yao” (Complete Compendium of Military Classics) the work detailed the use of ballistic fire arrows not launched by bows, but by charges of gunpowder.

While the date of their introduction is uncertain, the fire arrows launched by gunpowder are considered to be the first true rockets. These fire arrows were traditional feathered arrows propelled by ignited gunpowder housed in a tube tied to the arrow.

The fire arrows carried flammable materials or sometimes poison-coated heads. In a form more closely resembling modern rockets, the gunpowder tube was lengthened to the tip of the arrow and given a pointed nose, eliminating the need for a traditional arrowhead.

Once it was discovered that the fire arrows flew a straight path even after their feathers were burned up by the gunpowder exhaust, the feathers were completely removed. The resulting fire arrow was quite similar in appearance to fireworks used today.

The Chinese typically launched these fire arrows in salvoes from arrays of cylinders or boxes which could hold as many as 1,000 fire arrows each. The fire arrows propelled by gunpowder may have had a range of up to 1,000 feet.

The use of gunpowder propelled weapons proliferated in the coming centuries, especially after their existence was confirmed by Europeans. In 1232, descriptions of a Mongolian siege of the city of Kai-fung-fu were widely circulated.

During this battle, the Mongols employed a potent form of fire arrow described as causing “thunder that shakes the heavens”. These may have been primitive grenades launched by gunpowder propelled fire arrows. A single one of these was reportedly able to burn a 2,000 foot area.

The Use Of Gunpowder Fire Arrows Spreads

By the end of the 13th century, armies of Japan, Java, Korea and India are believed to have acquired sufficient knowledge of gunpowder propelled fire arrows to begin using them against the Mongols. Use of the weapons quickly spread throughout Asia and Eastern Europe.

There is still debate as to the specific design and effectiveness of gunpowder propelled fire arrows, but they remain the solitary spark that ignited the path to modern rocketry.

The Use Of Gunpowder Advances

At the same time gunpowder propelled fire arrows were blazing in battle, scientific papers on the subject of the preparation of gunpowder and its application in weaponry were being published in Europe. Notable works were prepared by Roger Bacon, Albertus Magnus and Marchus Graecus before the close of the 13th century.

In 1379, an Italian named Muratori used the word “rochetta” when he described types of gunpowder propelled fire arrows used in medieval times. This is believed to be the first use of the word later translated in English as “rocket”.

War Rockets Are Studied And Refined

In the early 15th century, the scientific analysis of war rockets continued. In 1405, Konrad Kyser von Eichstadt wrote “Bellifortis” (War Fortifications) which described war rockets in use at the time.

The First Attempt At Propelling A Man By Rocket Is Made

The 16th century may have dawned with the first attempt to carry a man in a rocket propelled vehicle. According to Chinese folk tale, a man named Wan-Hoo attempted this in around 1500. He reportedly took two large horizontal stakes and tied a seat between them.

Under the primitive device were placed 47 rockets set to be lit all at the same time. When the rockets were ignited, they burned erratically and could not provide effective thrust to move the contraption. Wan-Hoo is said to have burned to death in the resulting fire.

Vannoccio Biringuccio published “De La Pirotechnia” (On Pyrotechnics) in 1540. While this was primarily a book on metallurgy, it did contain several chapters on the preparation and use of rockets in warfare and festivals.

The book “Livre De Cannonerie Et Artifice De Feu” (Book Of Cannons And Fireworks) was published anonymously in Paris in 1561. It described how to construct 3.5-foot and 4-foot long rockets.

Nathaneal Lye published “The Art Of Gunnery” in 1647, which contained detailed instructions on the construction, handling and operation of a variety of pyrotechnic and military rockets. Several types of military rockets are also described in “Artis Magnae Artilleriae” (Great Art Of Artillery), published by Kazimierz Siemienowicz in 1650.

German field artillery colonel Christoph Friedrich is reported to have begun experimenting with war rockets weighing 55 to 120 pounds as early as 1668. In 1680, Peter the Great established the first rocket factory in Russia. Originally located in Moscow, the rocket factory provided the Russian Army with battlefield illumination rockets.

The Reaction Principle Is Scientifically Defined

Perhaps the most far reaching development in rocketry, if not in all of science, occurred in 1687 when Sir Isaac Newton published “Philosophiae Naturalis Principia Mathematica” (Mathematical Principles Of Natural Philosophy) which detailed what became known as the “Universal Laws Of Motion”.

While Newton did not intend to deal specifically with rocketry, he did apply mathematical models to the natural principles that make rockets work. His observations included the following, which are still fundamental models for rocketry and space science:

1. Newton’s Third Law Of Motion stated, “For every action there is an equal and opposite reaction.” This remains the fundamental principle of rocket propulsion, even today known as “reaction thrust”.

2. Newton theorized that if an object could be fired fast enough and at a high enough altitude, it would not fall, but could achieve an orbit around Earth.

3. Newton theorized that the gravitational pulls of the Sun and the planets affect the orbits of one another. This led to an accepted “system of the world” which predicted natural changes in the orbits of the known planets.

The Newtonian “system of the world” which predicted previously unexplained natural variations in the orbital paths of the planets led directly to the discovery of Neptune in 1846 and Pluto in 1930.

Newton’s Third Law Of Motion was demonstrated successfully in 1720 when Dutchman Jacob Willem Gravesande built a model of a car propelled by an internal steam engine. Steam reaction became a platform for the design and testing of a plethora of vehicles, none of which proved practical.