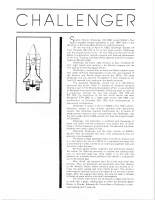 Shuttle Orbiter Challenger (OV-099) joined NASA’s fleet of reusable winged spaceships in July 1982 when it was delivered to Kennedy Space Center for flight processing. On the morning of April 4, 1983, Challenger blasted off from Complex 39’s Pad A on its first space mission. Challenger was the second orbiter to fly. Its first flight was the sixth of the Space Transportation System program and featured deployment of the first Tracking and Data Relay Satellite and the first spacewalk of a Shuttle flight. Challenger has flown nine missions to date, including the first night launch and landing in the Shuttle program and the first landing at Kennedy Space Center.

Challenger is named after an American Naval research vessel that made extensive oceanographic cruises over vast expanses of the Atlantic and Pacific oceans during the 1870s. The name Challenger was also used for the Apollo 17 lunar module on the final U.S. manned lunar landing of the Apollo program. The spaceship Challenger started out as a high-fidelity structural test article. After 11 months of extensive vibration testing as part of the Shuttle development effort, it was modified at Rockwell International’s Palmdale, California plant as a part of a production contract for two new orbiters (OV 103 and OV 104), the conversion of the test article (which had been designated STA 099) to a flight-rated orbiter (OV 099), and modification of Columbia (OV 102) from developmental to operational configuration.

Challenger is nearly a twin of NASA’s first flight orbiter, Columbia, except it was initially outfitted with operational systems that Columbia required modification for. A variety of weight-saving measures were incorporated into Challenger, and the ship weighs about 5,000 pounds less than the original weight of Columbia. Challenger, like Columbia, is outfitted with thousands of black and white thermal protection tiles except that on Challenger’s orbital maneuvering system pods, the advanced insulation blankets were used in place of tiles. Otherwise, Challenger and the other orbiters of NASA’s Shuttle fleet are basically the same, with components that are generally interchangeable.

The Delta winged spaceship looks a lot like an airplane and is in fact about the size of a DC 9. It is launched into space like a conventional rocket, bolted to an external propellant tank and two solid rocket boosters. Kennedy Space Center engineers and technicians prepare the orbiter for flight by servicing its systems and loading cargo into its bus-sized cargo bay. They attach it to the tank and boosters on a mobile launch platform and vehicle is transported out to the launch pad. After liftoff, the boosters burn for a little more than two minutes. They are jettisoned, and parachutes slow their descent to the Atlantic Ocean, where recovery ships are waiting to retrieve the spent casings and return them to port. The orbiter’s main engines continue to burn until about 8 1/2 minutes into the flight. After the engines shut down, the external tank is released to break up upon reentry into earth’s atmosphere. The orbiter then carries out its mission in space and returns to earth like a glider, landing back at either the Kennedy Space Center in Florida, Edwards Air Force Base in California, or alternate landing sites if required.