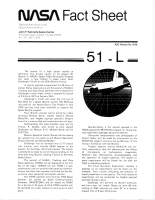 The launch of a high school teacher as America’s first private citizen to fly aboard the Shuttle in NASA’s Space Flight Participant Program will open a new chapter in space travel when Challenger lifts off on the 25th Shuttle mission. A science payload programmed for 40 hours of Comet Halley observations and the second of NASA’s Tracking and Data Relay Satellites will be aboard for Challenger’s tenth flight, which is targeted for launch at 3:43 p.m. EST on January 24th. Challenger’s liftoff will mark the first use of Pad 39-B for a Space Shuttle launch. Pad 39-B was last used for the Apollo-Soyuz Test Project in July, 1975 and has since been modified to support the Space Shuttle program.

Four Shuttle veterans will be joined by rookie astronaut Michael Smith, teacher observer Christa McAuliffe, and Hughes payload specialist Gregory Jarvis for a mission that will extend just over six days. Commanding the seven-member crew will be Francis R. Scobee, who served as pilot aboard Challenger on Mission 41-C. Michael Smith will be 61-C Pilot. Mission Specialist Judith Resnik will be making her second trip into space as will Mission Specialists Ellison Onizuka and Ronald McNair.

Challenger will be launched into a 177 statute mile circular orbit inclined 28.45 degrees to the equator for the 6 day, 34 minute mission. The orbiter is scheduled to make its end-of-mission landing on the three-mile-long Shuttle Landing Facility at Kennedy Space Center. The second of NASA’s Tracking and Data Relay Satellites (TDRS) will be deployed on the first day of the flight. TDRS-B will join TDRS-1 in geosynchronous orbit to provide high-capacity communications and data links between earth and the Shuttle, as well as other spacecraft and launch vehicles. The TDRS satellites were built by TRW Space Systems, are owned by Space Communications Company (SPACECOM), and are leased by NASA for a period of 10 years. A third TDRS satellite will be launched on a later mission to serve as an in-orbit spare.

Spartan-Halley is the second payload in the NASA-sponsored SPARTAN program for flying low-cost experiment packages aboard the Shuttle. Ultraviolet measurements and photographs of Comet Halley will be made by instruments on the SPARTAN support structure during 40 hours of free flying in formation with the Shuttle. Teacher observer Christa McAuliffe will perform experiments that will demonstrate the effects of microgravity on hydroponics, magnetism, Newton’s law, effervescence, chromatography, and the operation of simple machines. The teacher in space experiments will be filmed for use after the flight in educating students.

The Fluid Dynamics Experiment, actually a package of six experiments, will be flown on the middeck. They involve simulating the behavior of liquid propellants in low gravity. The fluid dynamics experiments will be conducted by Hughes payload specialist Gregory Jarvis. Challenger will perform its deorbit maneuver and burn over the Indian Ocean on orbit 96 with landing at KSC occurring on orbit 97 at a mission elapsed time of 6 days 34 minutes.