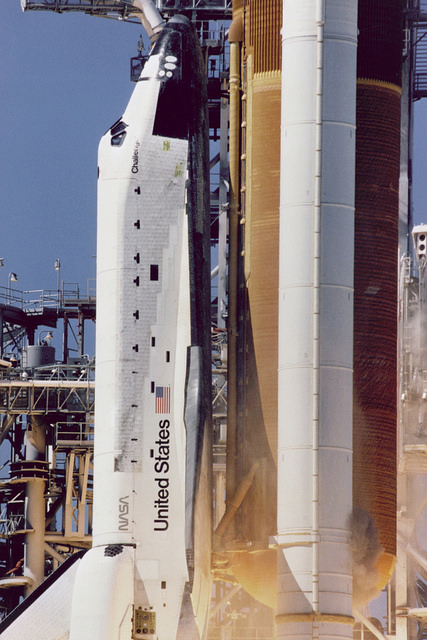 Space Shuttle Challenger began Mission STS-51L with a launch from Kennedy Space Center Launch Pad 39B at 11:38:00 a.m. EST on January 28, 1986. Challenger exploded 73 seconds after launch, and a crew of seven astronauts perished.

Soon after the Challenger explosion, President Ronald Reagan formed the Presidential Commission on the Space Shuttle Challenger Accident. The group became popularly known as the Rogers Commission after its Chairman, William P. Rogers.

The Rogers Commission quickly assumed the task of reviewing video, film and still images from about 200 cameras that photographed the launch and explosion of Challenger. Telemetry data was also reviewed, as was debris evidence recovered from the Atlantic Ocean. 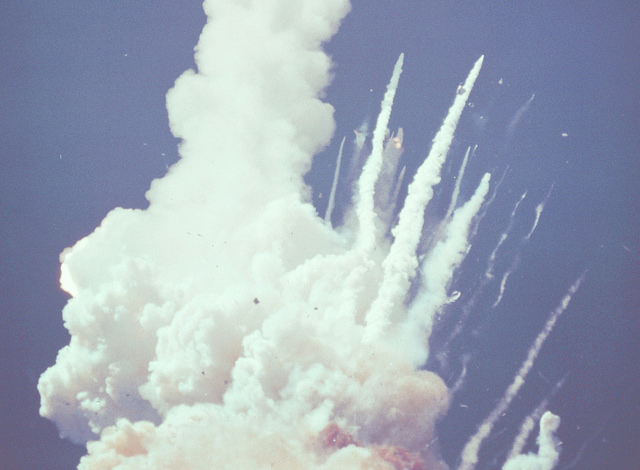 After a thorough analysis of the camera images and telemetry data was completed, the following scenario of events leading up to the Challenger explosion emerged:

At launch time, the temperature at the Kennedy Space Center was 36 degrees Fahrenheit. This was 15 degrees colder than any previous Space Shuttle launch. All of Challenger’s pre-launch preparations were routine, with the exception of tremendous ice buildup on the launch pad that formed as temperatures dipped into the low 20’s overnight.

At Launch Plus 58.788 seconds, a burn-through plume was seen emerging from the aft field joint of the right SRB. At roughly this same time, telemetry data indicated that the pressure of the right SRB had become lower than that of the left SRB.

At Launch Plus 73.191 seconds, a bright flash was seen between the ET and the Orbiter as leaking fuels and gases began to mix and ignite. This was followed by total vehicle break-up at Launch Plus 73.213 seconds.

The right SRB and left SRB continued to fly after the total vehicle had broken up. Video analysis confirmed that the aft field joint was missing from the right SRB as it continued to fly. Both SRB’s were destroyed by the Range Safety Officer at Launch Plus 110 seconds.

The photographic and telemetry information left little doubt as to the specific root of the Challenger explosion. But any firm conclusion of the Rogers Commission needed to be backed by examination of tons of debris recovered from the Atlantic Ocean in the seven months following the tragedy.

A total of 22 ships, six submersibles and 33 aircraft participated in a search for debris centered on the edge of the Gulf Stream and covering a total of about 93,000 square miles of ocean to a depth of 1,200 feet. All floating debris and any underwater debris considered to be important to the accident investigation were recovered.

The Orbiter debris did not show any signs that it had malfunctioned, and led to a conclusion that the Orbiter itself did not explode, but rather was torn apart by aerodynamic stress after the ET structural failure. The Orbiter’s three main engines showed no signs that they contributed in any way to the accident.

About 25% of the ET liquid hydrogen tank, 80% of the ET intertank and 5% of the ET liquid oxygen tank were recovered, along with a great deal of structural hardware from the ET itself. This debris confirmed that the ET contained no flaws, and did not contribute to the cause of the accident. 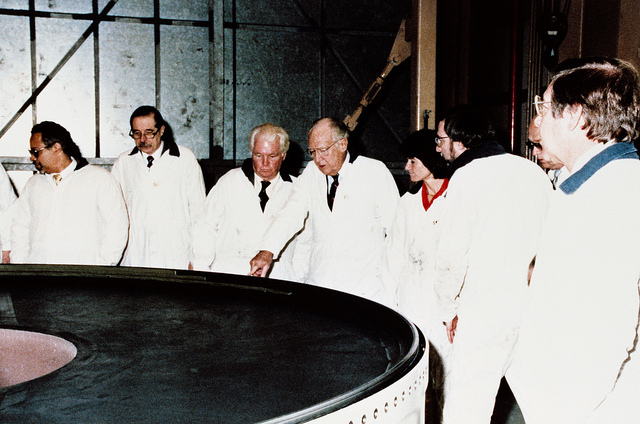 The Rogers Commission presented its report on the Challenger accident to President Reagan on June 6, 1986. In summary, the report concluded:

“The cause of the Challenger accident was the failure of the pressure seal in the aft field joint of the right solid rocket motor. The failure was due to a faulty design rendering the seal unacceptably sensitive to a number of factors.

These factors include the effects of temperature, physical dimensions, the character of materials, the effects of reuse and processing and the reaction of the joint to dynamic loading.”

The report also included nine recommendations for restructuring and redesigning the Space Shuttle program in order to greatly improve safety and reliability once Space Shuttles returned to flight.

While the report of the Rogers Commission is several thousand pages long, the nine basic recommendations, and specific actions taken by NASA prior to the return of Space Shuttles to flight on September 29, 1988 may be summarized as follows:

1. The Space Shuttle Solid Rocket Boosters (SRB) were extensively redesigned. This involved recertifying the boosters through a series of static test firings at the Morton Thiokol test facility in Utah.

2. Although landing system safety obviously was not a factor in the Challenger explosion, the Rogers Commission did uncover basic flaws in the safety of the Space Shuttle landing system.

3. Numerous hardware, software and safety improvements were incorporated into the Space Shuttle. These included the addition of a crew escape system which would allow astronauts to parachute from the Space Shuttle in certain conditions.

Astronauts, who had previously been boarding the Space Shuttle dressed in jumpsuits and helmets, were required to instead wear pressurized flight safety suits during launch and landing operations.

5. The Space Shuttle program was reorganized and decentralized to make sure all pertinent information was made available to management personnel at all levels. Where possible, experienced astronauts were placed in key NASA management positions to assure that the unique astronaut perspective would be consulted in launch decisions.

6. Documentation from all previous Space Shuttle missions was reviewed, and all documented waivers to existing flight safety criteria were revoked and forbidden. These included, but were not restricted to, previous decisions that allowed Space Shuttles to be launched in overly windy, cloudy and/or rainy conditions.

Certain launch commit weather criteria, especially those concerning temperature, winds and cloud cover, were reviewed and made more strict. Requirements were enacted which forced NASA and the contractor community at all management levels to be in complete agreement regarding launch decisions.

7. Any technical issues arising during preparation for a particular Space Shuttle mission were opened up to review by independent government agencies, such as the National Research Council, who would in turn relay their analysis and opinions to NASA.

These open reviews would afford discussions of all occurring or potentially occurring issues surrounding a Space Shuttle mission, with participation encouraged from all levels of NASA and contractor management, engineering and safety personnel.

9. A mechanism was put into place that would allow NASA and contractor personnel to provide open and anonymous reporting of Space Shuttle safety concerns without fear of reprisal. 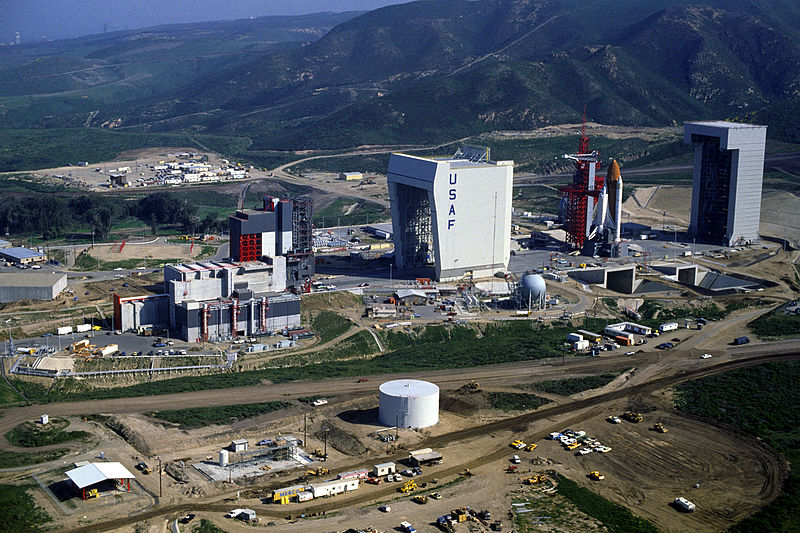 The previous policy of launching a plethora of commercial and military payloads on Space Shuttles had resulted in numerous back-logs in the Space Shuttle manifest, which in turn placed pressure on NASA and contractor personnel to quicken Space Shuttle processing and perhaps compromise Space Shuttle safety.

A third Space Shuttle launch pad at Vandenberg Air Force Base, California Space Launch Complex-6 (SLC-6, nicknamed “Slick-6”) under final preparations for launch at the time of the Challenger explosion was abandoned.

SLC-6, originally a Titan III launch facility, had been renovated for the Space Shuttle at a cost of $5.5 billion and was declared operational in October, 1985 as a fully equipped Space Shuttle launch, landing and processing site.

The Vandenberg facility was intended to permanently host Space Shuttle Discovery for a plethora of polar orbit military missions. One of the only hurdles that remained before the activation of SLC-6 was a flight readiness test firing of Space Shuttle main engines at the launch pad, which had been scheduled for Space Shuttle Columbia in early 1986.

Following the Challenger accident, NASA canceled this flight readiness test firing at Vandenberg as “too risky”. In subsequent months, a number of technical flaws were uncovered at SLC-6 that would cost up to $1 billion and two years of work to repair.

That revelation, coupled with a NASA decision not to pursue a long-term schedule of launching military payloads, sealed the fate of the Space Shuttle launch site at Vandenberg. 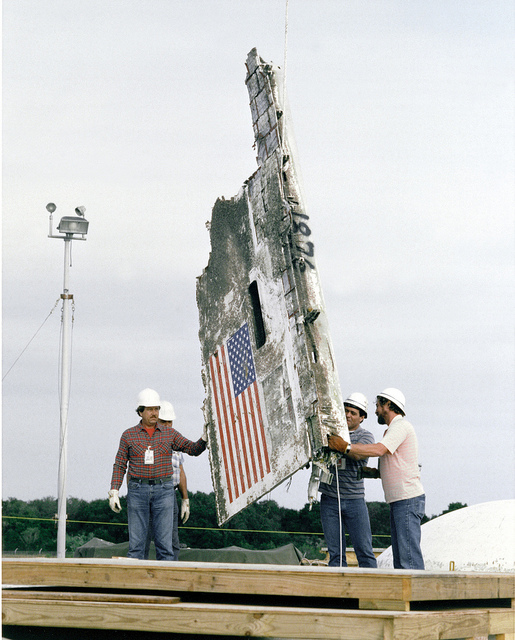 In January, 1987 the recovered remains of Space Shuttle Challenger were transported to abandoned Launch Complex 31/32 on Cape Canaveral Air Force Station, where they were sealed in two 80-foot deep Minuteman missile silos and adjacent underground equipment rooms. The remains are expected to be stored there indefinitely.