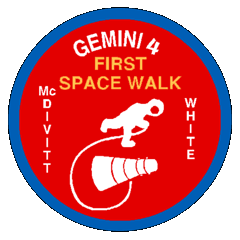 Considered the first long-duration U.S. space flight, primary mission objectives included the evaluation of both spacecraft and crew during a prolonged time in space.

Secondary objectives included a test rendezvous with the spent Titan II second stage, the first attempt at a U.S. spacewalk, continued testing and evaluation of the Orbital Attitude Maneuvering System (OAMS) and the completion of 11 scientific experiments.

Early in the mission, a decision was made to cancel an attempted rendezvous with the spent Titan II second stage because too much OAMS fuel had been used up during initial stationkeeping operations.

It was also discovered that when the Gemini 4 spacecraft’s thrusters were fired when on the same orbital path as the spent Titan II second stage, the spacecraft moved farther away from, and not closer to, the target. This altered the way NASA planned future rendezvous, which were subsequently performed “upward” from a lower, faster orbit.

Difficulties in the orbital maneuvering procedures caused the historic first U.S. spacewalk to be delayed one orbit. The spacewalk was originally planned for the second orbit, but was postponed to the third.

Astronaut White also took more time than expected to prepare for his spacewalk, which included an unexpected struggle to open a latch on the hatch, which had become jammed and difficult to handle.

At a mission elapsed time of 4 hours, 18 minutes the capsule hatch was opened. Astronaut White exited the hatch 12 minutes later, after first taking time to stand upright in his seat and affix a 16-mm film camera to the spacecraft to record his historic feat. As he prepared to exit, White lost a thermal overglove which subsequently drifted away from the spacecraft.

White became the first U.S. astronaut to perform a spacewalk, and propelled himself out of the spacecraft using an innovative Personal Propulsion Unit (PPU), also called a Hand-Held Maneuvering Unit (HHMU). The device took just 20 seconds to expend its supply of compressed oxygen, but performed well.

For the duration of the spacewalk, White remained tethered to the Gemini 4 spacecraft by a 25-foot life support umbilical line. The line contained an oxygen supply hose, bioinstrumentation wires and a support tether. White reported that the line was a good tool for keeping an astronaut from becoming separated from the spacecraft, but was unruly and very easily tangled.

White remained outside the Gemini 4 spacecraft for about 20 minutes, before being commanded inside by McDivitt. White said after being called back inside after just 20 minutes, “It’s the saddest moment of my life”. White later explained that his spacewalk was the most comfortable part of the mission.

While reentering the spacecraft, White accidentally smeared McDivitt’s window. Before closing the hatch, White discarded his thermal overgloves and helmet sun visor. The latch again proved difficult to operate, and White took five minutes to deploy it. During this time, he exceeded the cooling capacity of his spacesuit, which resulted in severe condensation inside his helmet.

The hatch was closed at a mission elapsed time of 4 hours, 54 minutes. This placed the duration of the first U.S. spacewalk at 36 minutes from hatch opening to hatch closing. Because the hatch was so difficult to open and close, a decision was made not to open and close it again to discard equipment.

This was the first U.S. manned space mission controlled from NASA Mission Control at the Johnson Space Center in Houston, Texas. All previous U.S. manned space flights were controlled from the NASA Mission Control Center on Cape Canaveral. This was also the first time mission control personnel were divided into three separate shifts.

This was the last space flight for astronaut White, who was killed in the tragic Apollo 1 fire on January 27, 1967.

Note: The first spacewalk was performed by Soviet cosmonaut Aleskei Leonov during the Voskhod 2 mission, launched on March 18, 1965. Leonov’s spacewalk lasted 24 minutes. Unlike astronaut White’s lifeline tether, Leonov carried his air supply in a tank strapped to his back. 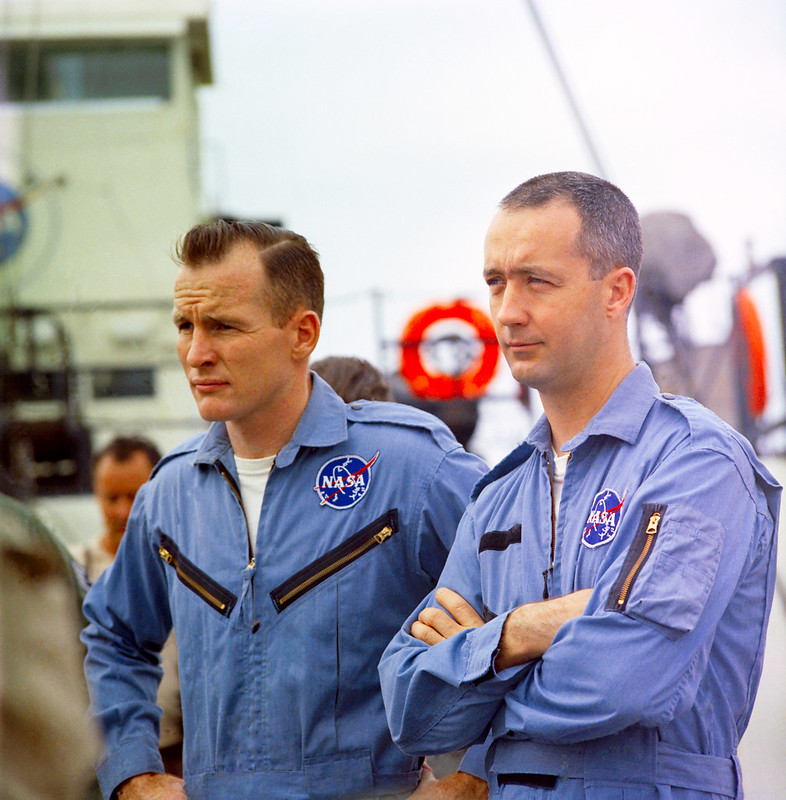 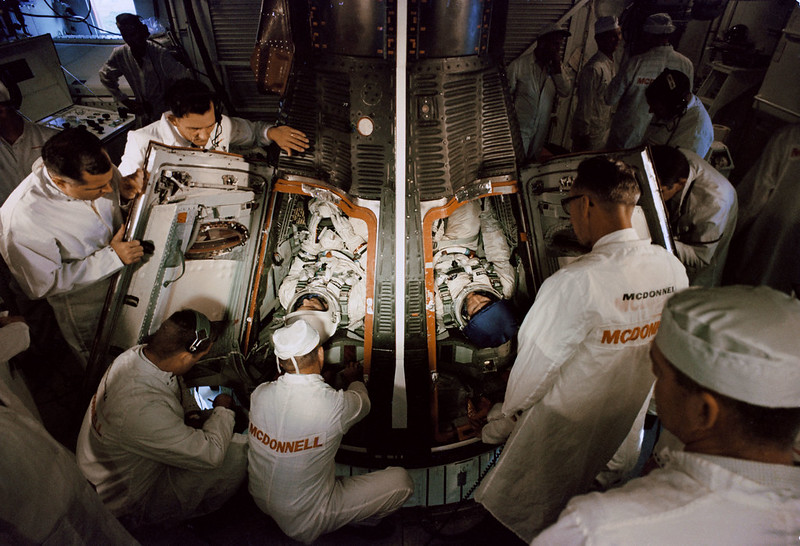 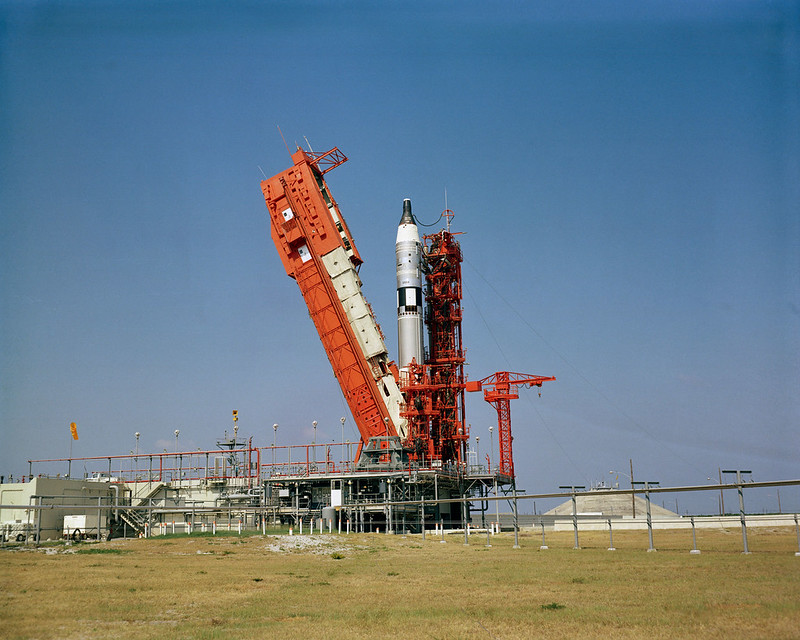 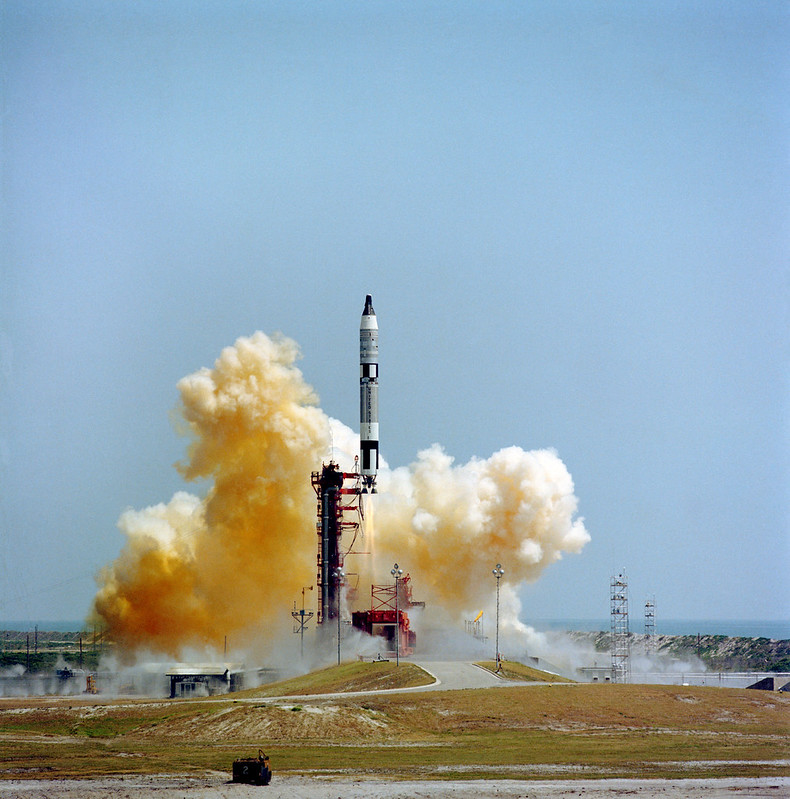 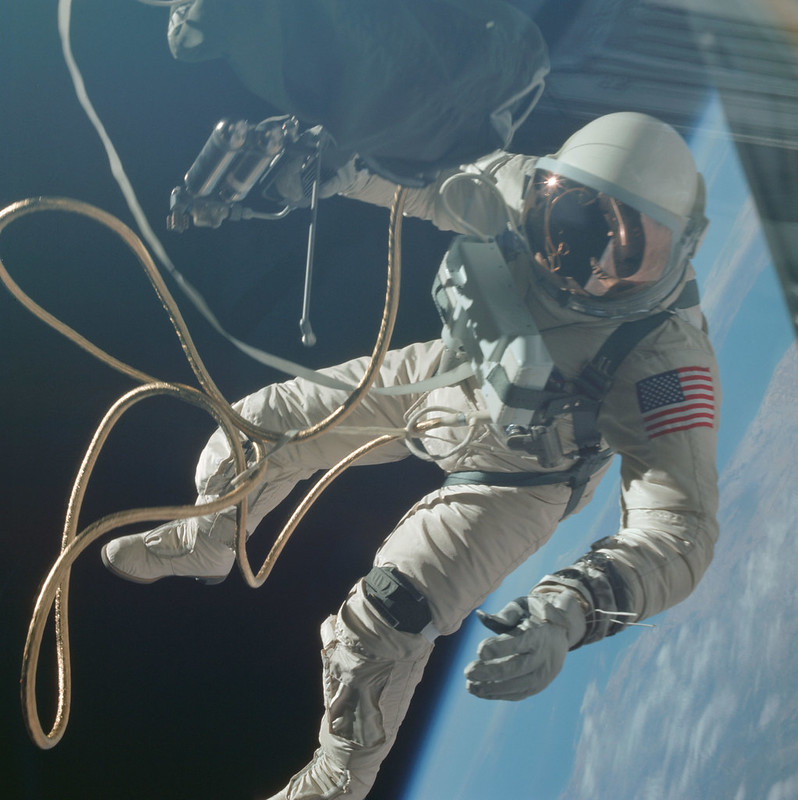 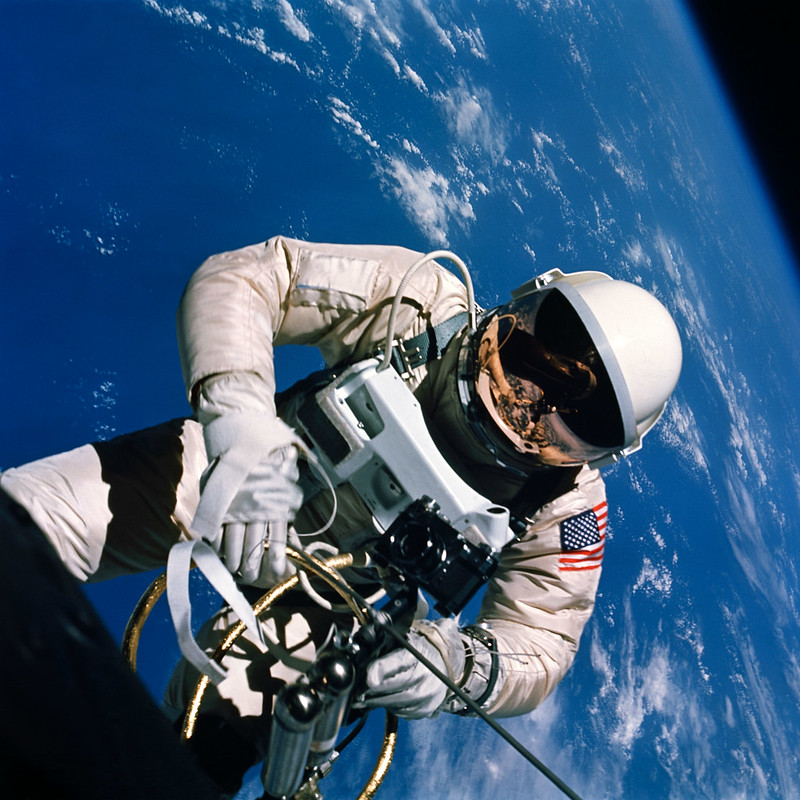 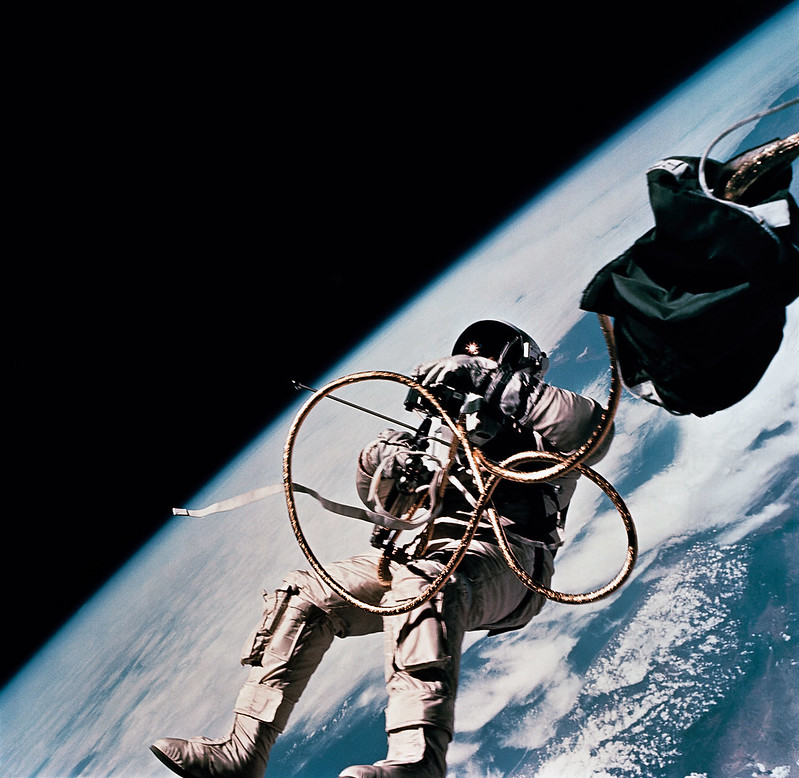 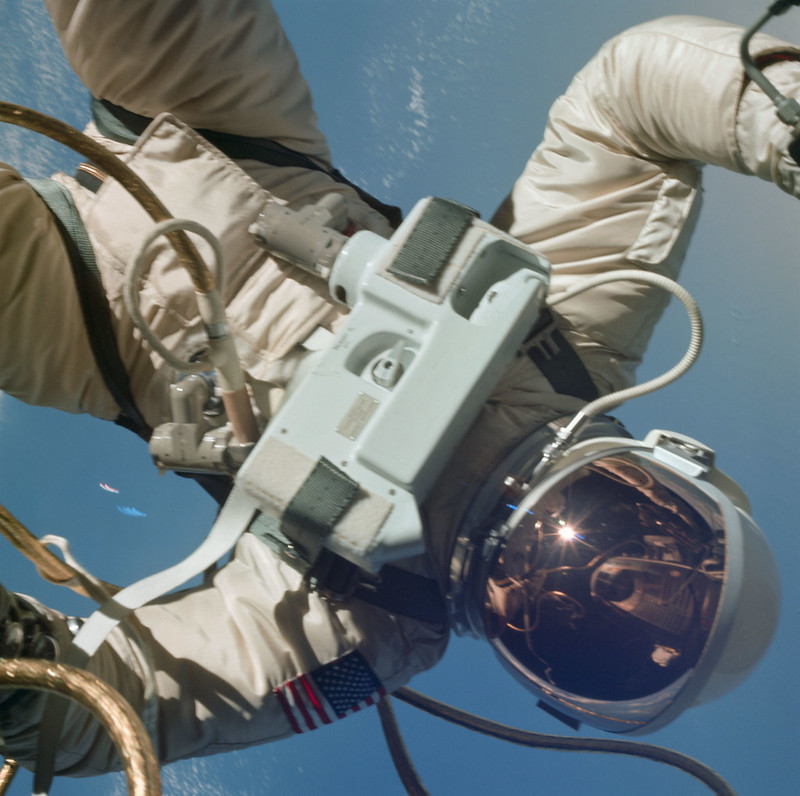 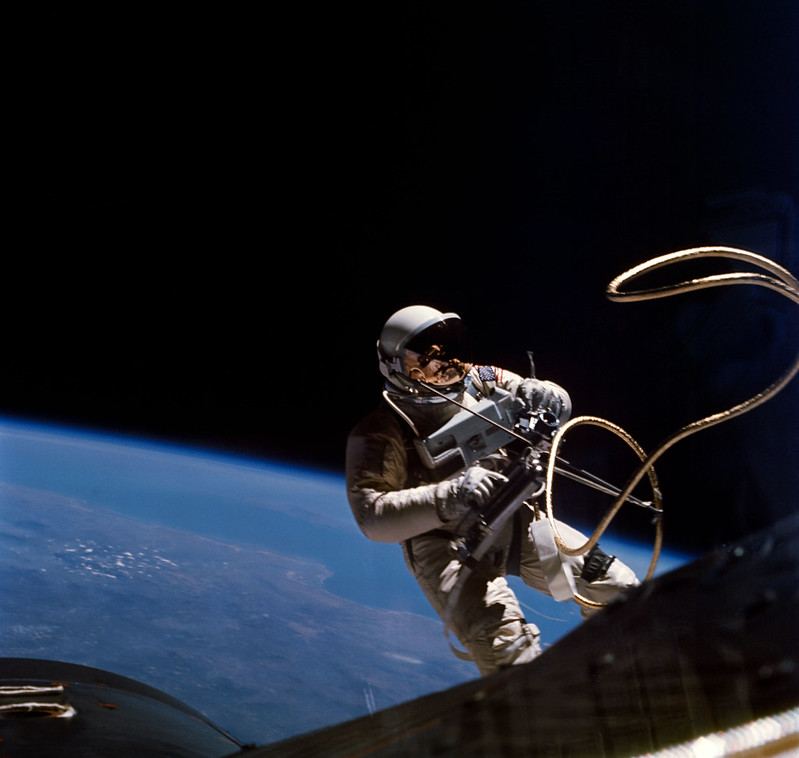 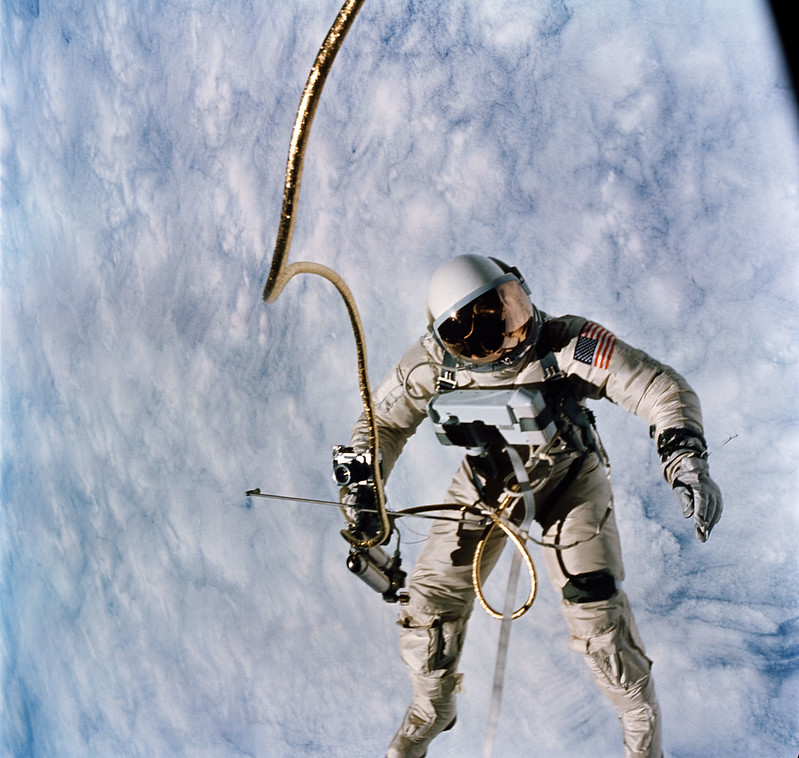 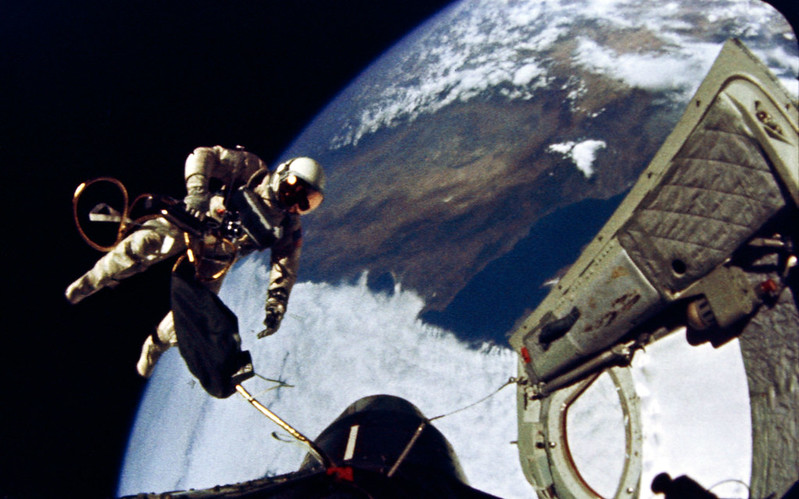 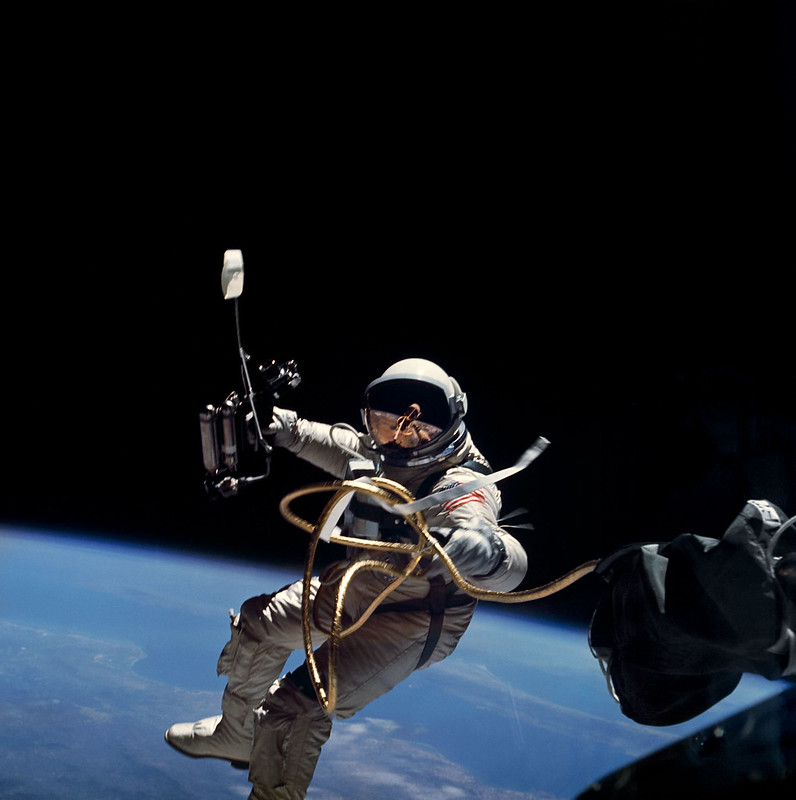 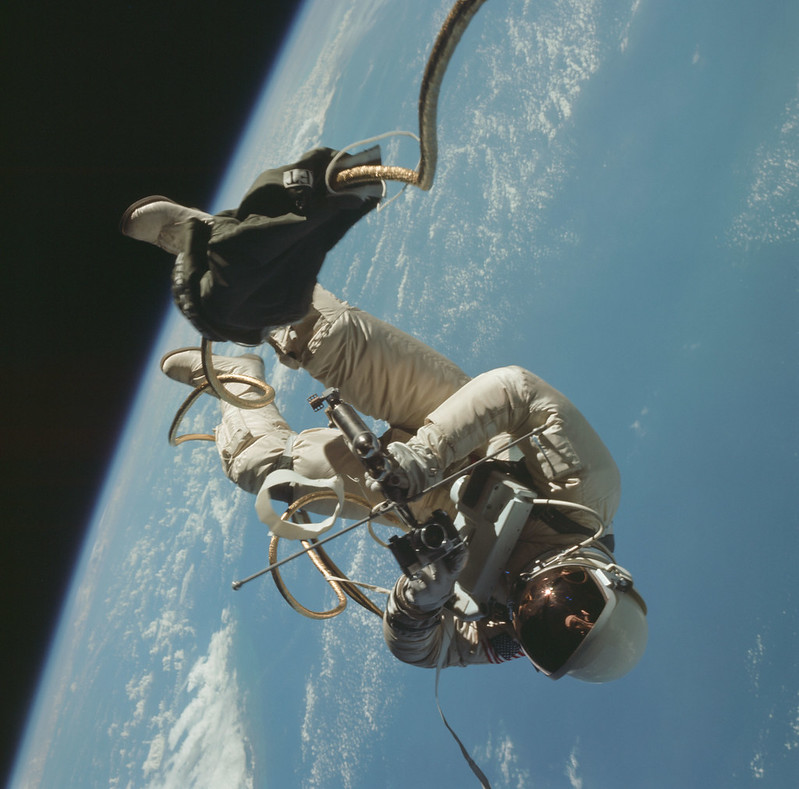 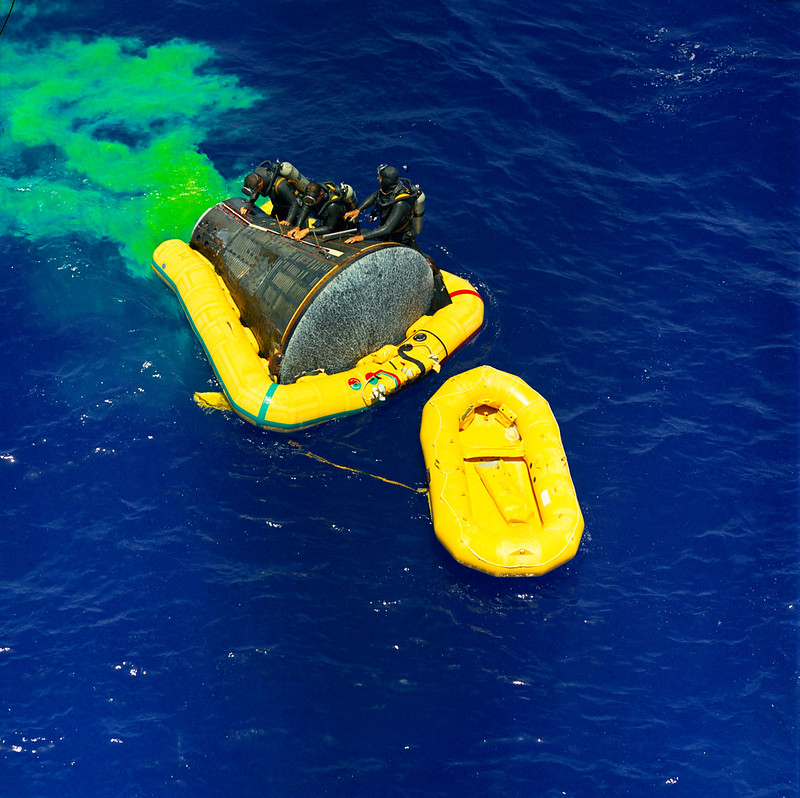 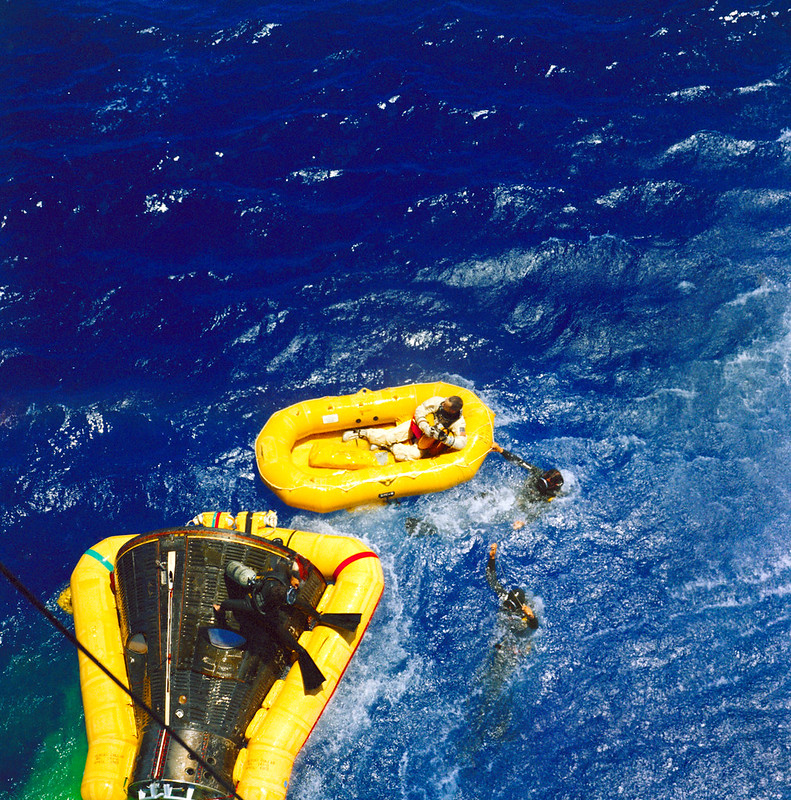 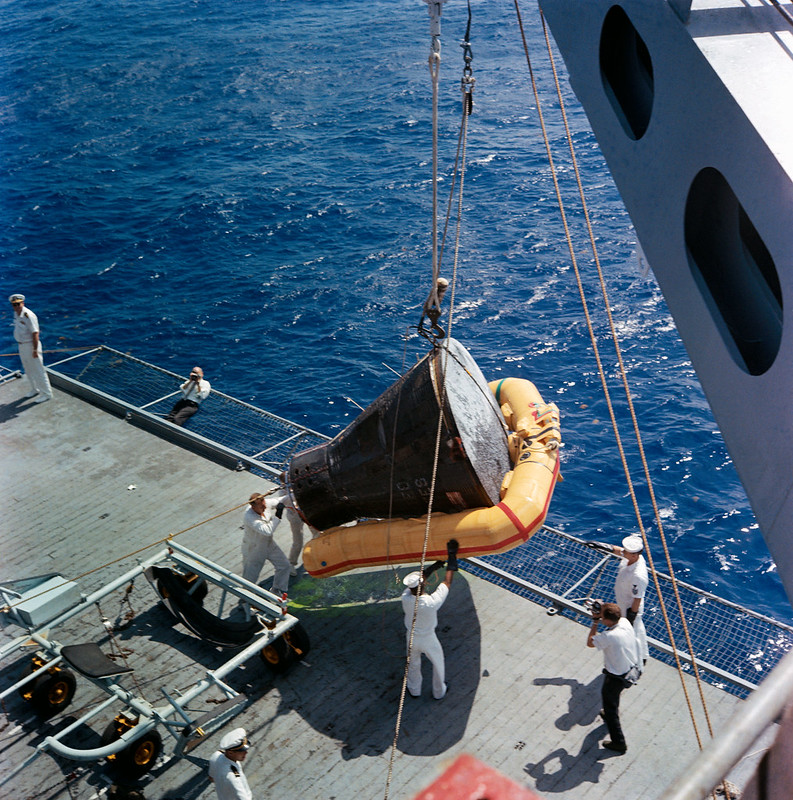