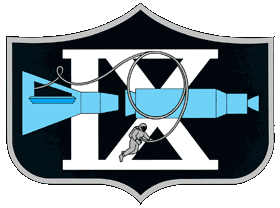 A launch attempt on May 17, 1966 was scrubbed when the Gemini Agena Target Vehicle (GATV) failed to achieve orbit. The Atlas-Agena launch vehicle guidance system failed due to a short circuit in a servo control circuit.

The malfunction caused one of the two Atlas booster engines to pitch downward at Launch Plus 120 seconds, effectively turning the rocket back toward Cape Canaveral. The change in the flight path was sufficient to prevent the GATV from achieving orbit, and it impacted the Atlantic Ocean about 90 miles downrange of Cape Canaveral.

Upon the loss of the GATV, NASA decided to launch an Augmented Target Docking Adapter (ATDA) in its place, and Gemini 9 was renamed Gemini 9A. The ATDA, also an Agena-based vehicle, was launched as the second stage of an Atlas-Agena rocket from Cape Canaveral Launch Complex 14 on June 1, 1966.

A subsequent launch attempt of the Gemini 9A spacecraft on June 1, 1966 was scrubbed due to a ground equipment failure which prevented the transfer of data to the spacecraft computer. This resulted in a launch delay of two days.

Rendezvous with the ATDA was successfully completed on the third orbit of the mission, but a docking could not be accomplished. Although the ATDA had been successfully launched, its shroud had failed to separate, making a docking attempt impossible.

The ATDA subsequently was dubbed the “Angry Alligator” by astronauts Stafford and Cernan because the partially separated Agena shroud took on the appearance of a long, open mouth. Although the docking could not be accomplished, the crew successfully completed several test maneuvers during rendezvous operations.

These included a rendezvous using optical equipment only, and a rendezvous from above the ATDA, as opposed to the rendezvous from below approach that had been employed in previous Gemini flights. This was an important step in validating proposed docking techniques between Apollo Command Modules and Apollo Lunar Modules.

The Gemini 9A spacecraft began moving away from the ATDA at a mission elapsed time of 22 hours, 59 minutes. Although a spacewalk by astronaut Cernan was scheduled for the second day of the mission, it was postponed due to crew fatigue, and the crew devoted their second day in space to experiments.

The capsule hatch was opened at a mission elapsed time of 49 hours, 23 minutes for astronaut Cernan to begin his spacewalk, the second in the history of the U.S. space program. Cernan exited the hatch 17 minutes later. Unlike the Gemini 4 spacewalk, Cernan exited the spacecraft manually, without the aid of a Personal Propulsion Unit (PPU).

Cernan spent 1 hour, 46 minutes outside the Gemini 9A spacecraft. Like the spacewalk performed by astronaut White during Gemini 4, Cernan remained tethered to the Gemini spacecraft by a 25-foot life support umbilical line, which Cernan also found to be unruly and later nicknamed “the snake”.

During the spacewalk, Cernan was supposed to have performed the first test of an innovative thruster-powered astronaut maneuvering unit (AMU), which was stored in the Gemini 9A adapter section and needed to be accessed from outside the spacecraft. The AMU, which had a self-contained life support unit, would allow Cernan to propel himself up to 150 feet away from the spacecraft and back.

However, Cernan had to work so hard to prepare and don the AMU that the faceplate of his helmet fogged from heavy breathing. As he struggled with the AMU, Cernan accidentally broke an experiment antenna attached to the Gemini 9A spacecraft, which caused several tears in the outer layer of his spacesuit.

The helmet fogging, over exertion of Cernan and reports of “hot spots” caused as the sun hit the tears in his spacesuit resulted in the AMU testing being canceled, and the spacewalk being cut short.

The hatch was closed at a mission elapsed time of 51 hours, 30 minutes. The crew then devoted the remainder of their flight to the performance of experiments. The Gemini 9A capsule splashed down less than one mile from its primary recovery point, establishing the best recovery distance of the Gemini program.

The two astronauts were killed when their T-38 jet training aircraft crashed in rain and fog short of the St. Louis Municipal Airport. Although the T-38 had been cleared for an instrumented landing due to poor weather conditions, the jet strayed to the left of the runway before an attempted landing.

Ironically, the McDonnell Douglas plant that the T-38 jet training aircraft crashed into was the exact location that the Gemini 9 spacecraft was being prepared for flight.

Astronauts Stafford and Cernan were subsequently named the primary crew for Gemini 9, and astronaut Alan B. Shepard, Jr. was appointed to head a seven-member board given the task of investigating the T-38 crash.

SELECTED NASA PHOTOS FROM GEMINI 9A 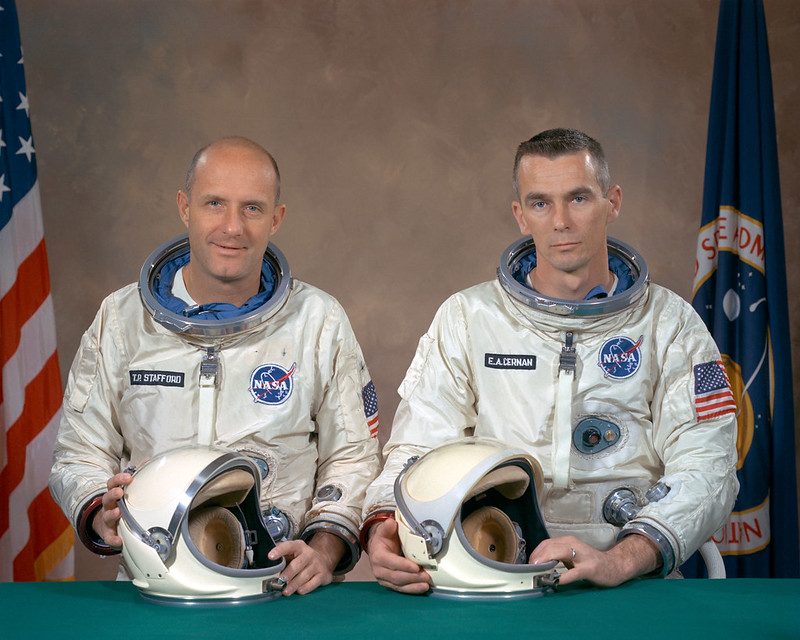 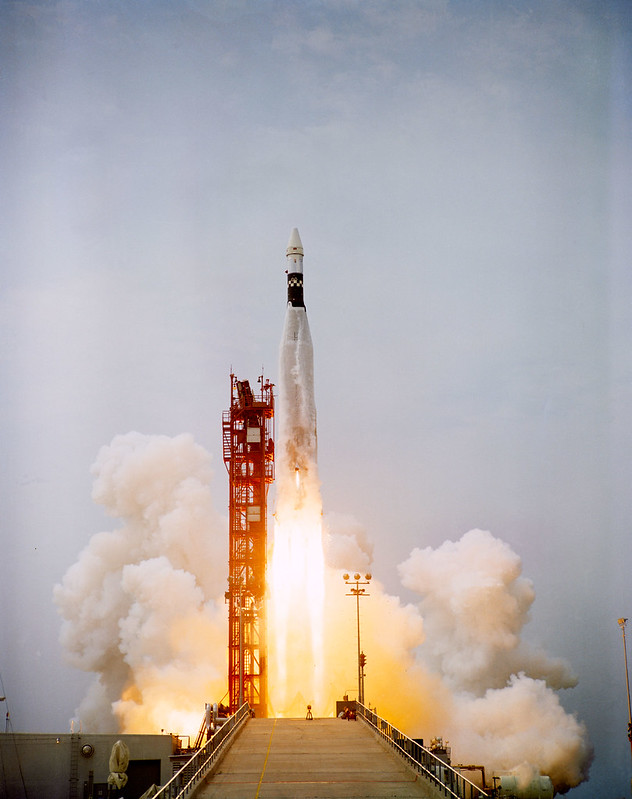 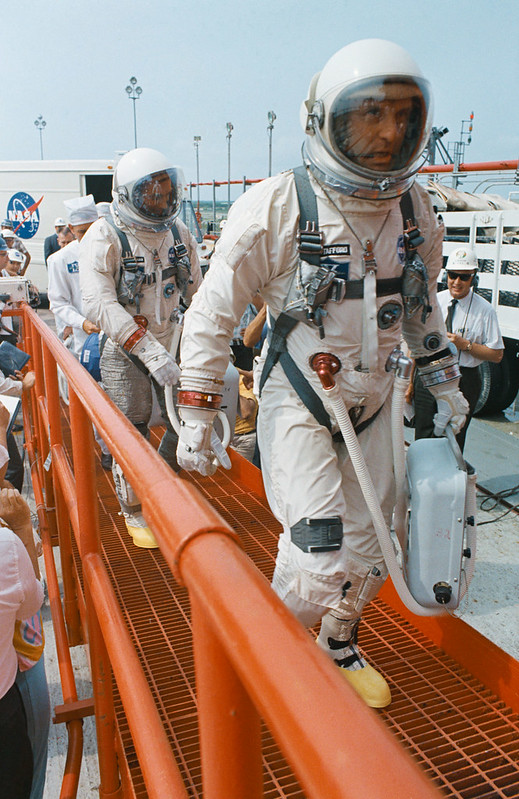 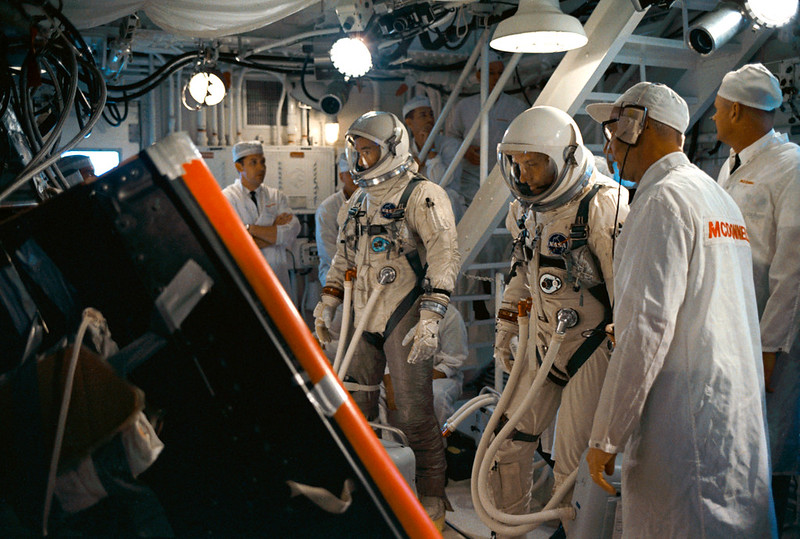 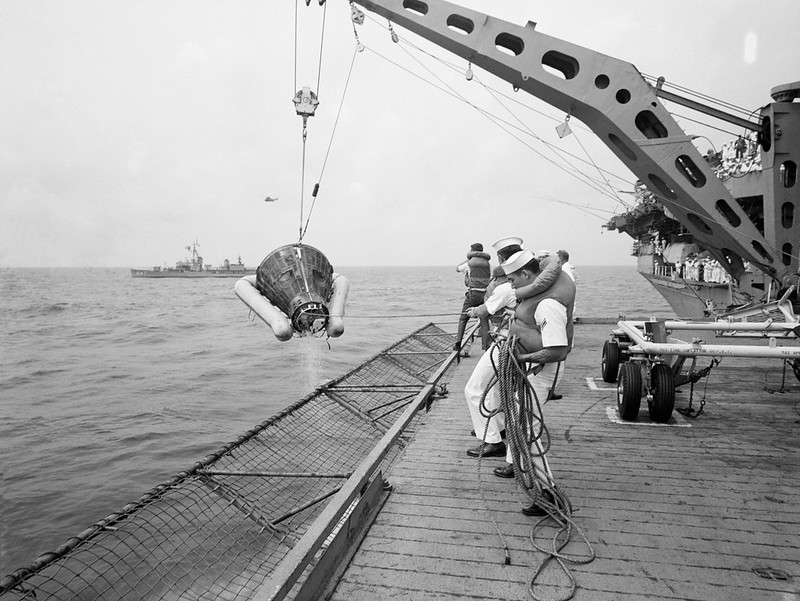 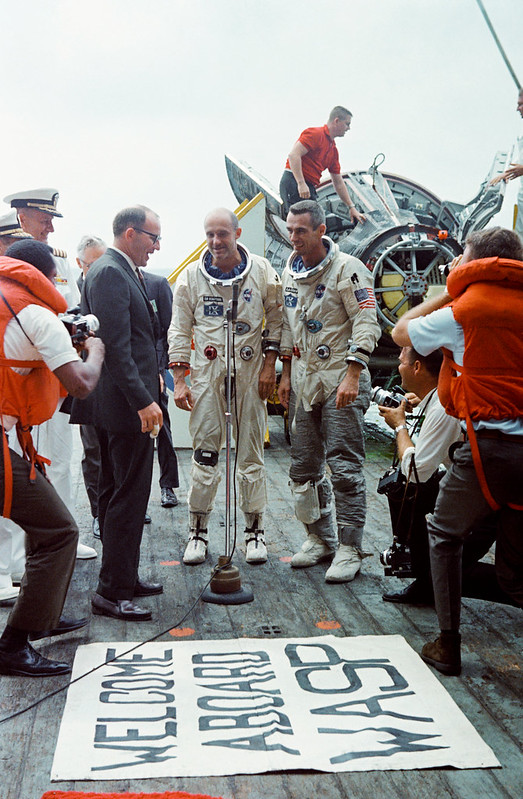 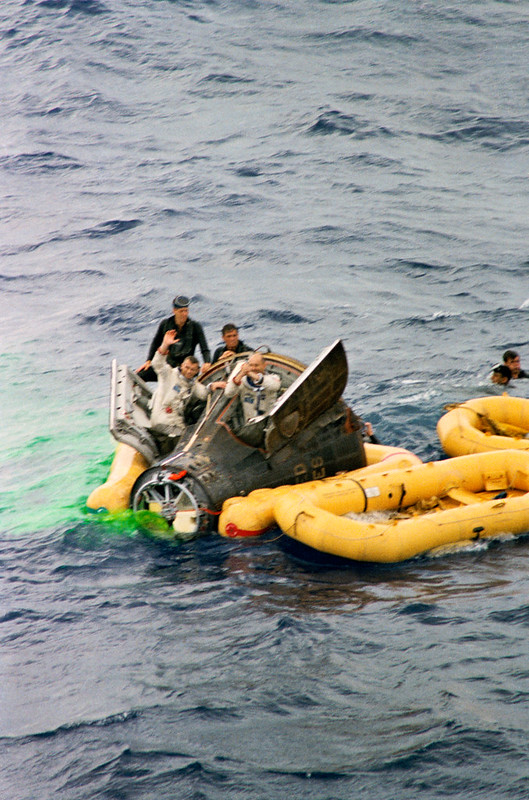 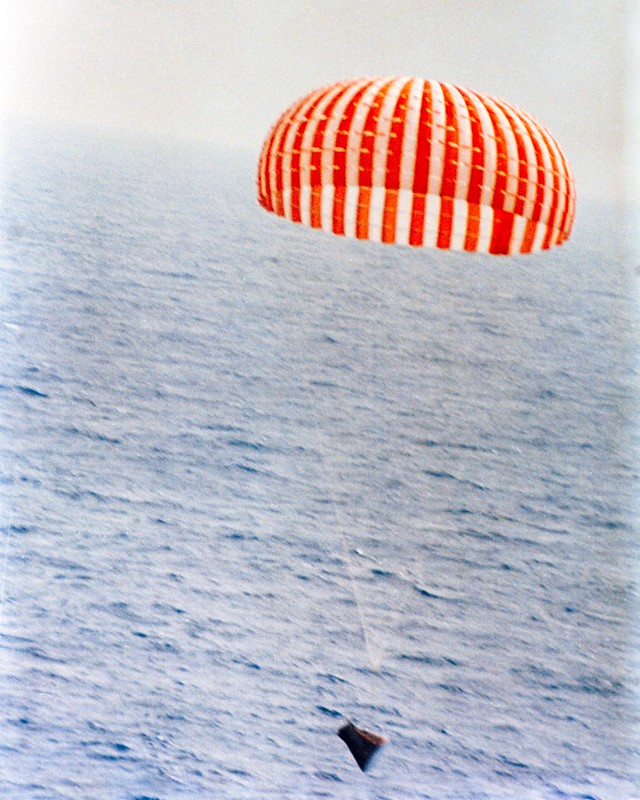 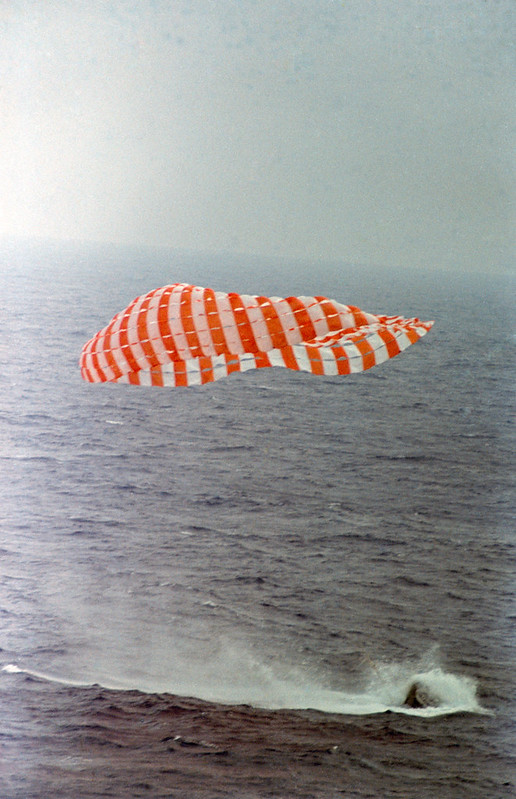 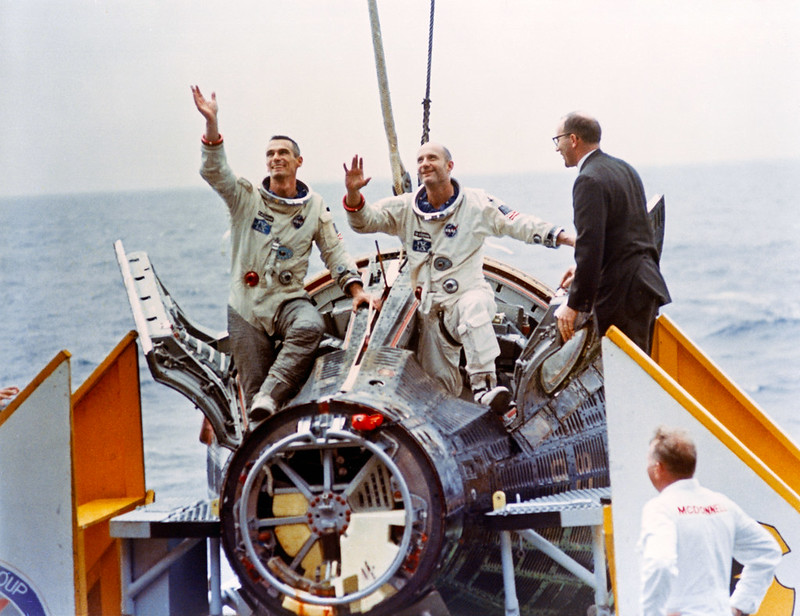 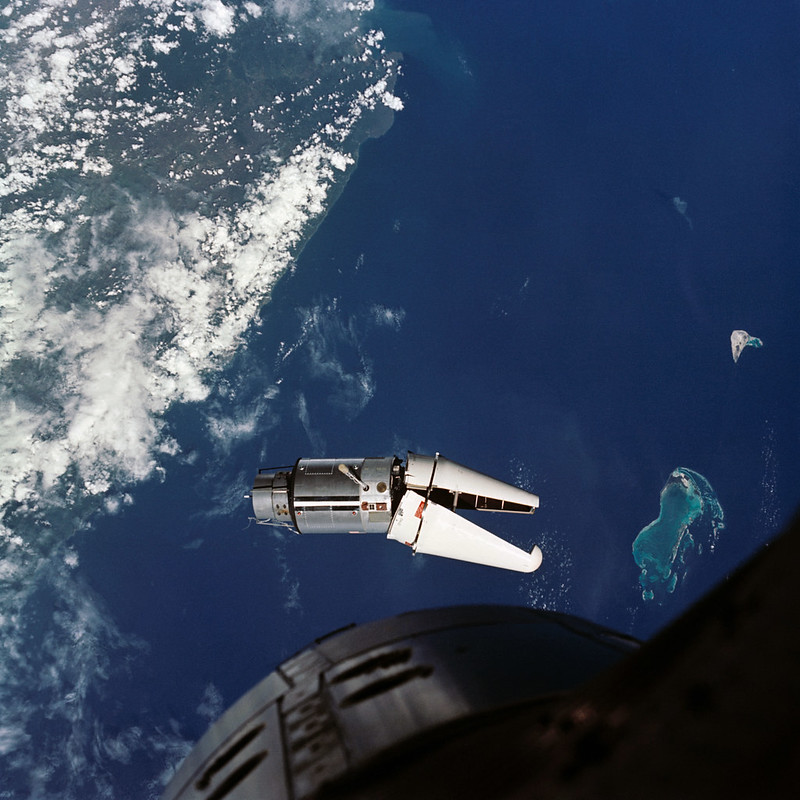 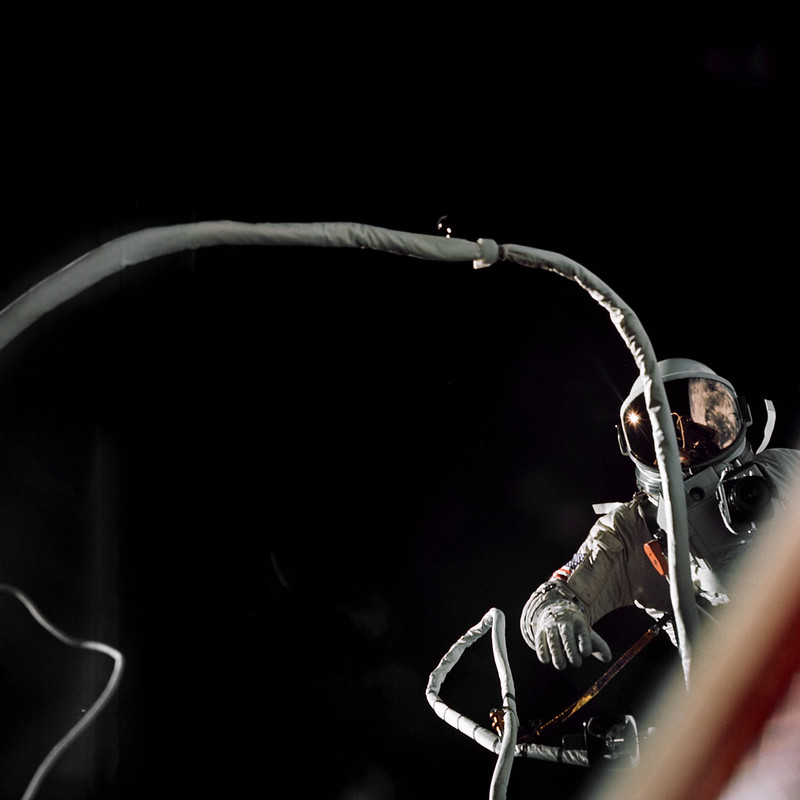 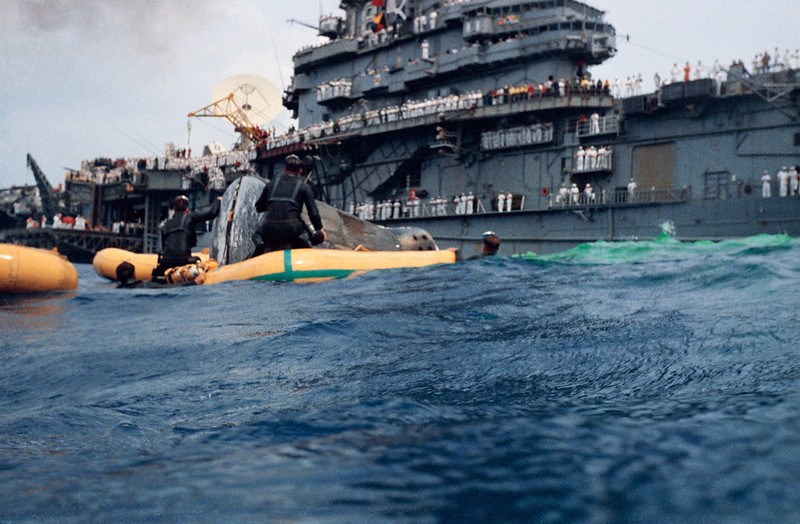 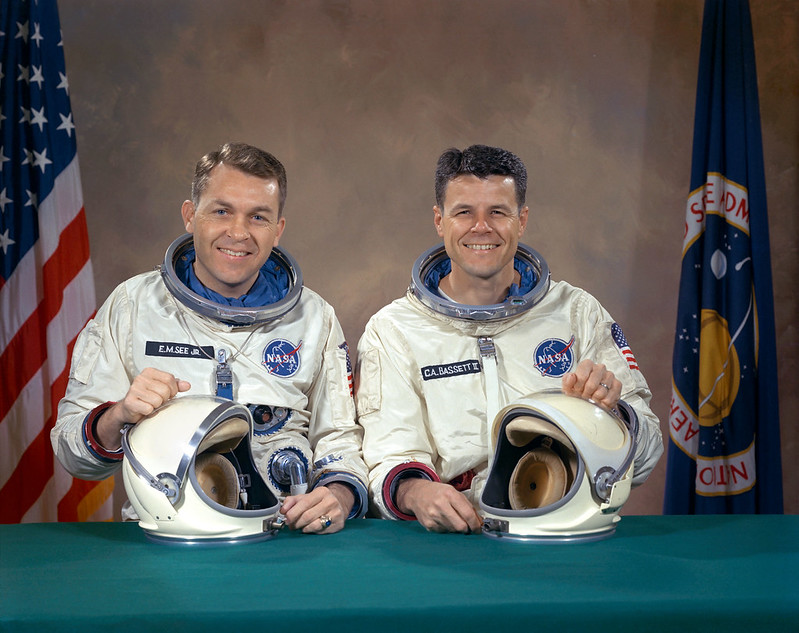