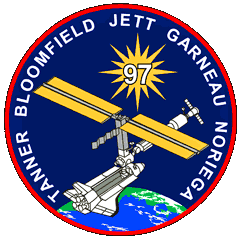 STS-97 marked the sixth Space Shuttle flight to the International Space Station (ISS) and Endeavour became the first Space Shuttle to be met at ISS by a permanent ISS crew. Endeavour docked to ISS at 3:00 p.m. EST on December 2, 2000 but due to an ambitious schedule of spacewalks, the STS-97 crew would not actually meet the ISS Expedition One crew until about a week later.

Astronauts Tanner and Noriega conducted the first spacewalk of the mission on December 3, 2000. This spacewalk lasted 7 hours, 33 minutes. The major objective was to install the P6 Solar Array to the ISS Z1 Truss Assembly. During the spacewalk, the starboard wing of the P6 Solar Array was unfurled, but the effort took several attempts because some of the pins holding the wing in place did not release properly. A decision was made to postpone unfurling of the port wing until the pin release problem was understood. The astronauts also deployed one of three radiators designed to dissipate heat generated by the P6 Solar Array’s onboard electronics.

Following the first spacewalk, the port wing of the P6 Solar Array was unfurled slowly. Initially, two rows of solar panels stuck together, but they were successfully deployed through a process of retracting then extending the solar arrays until they were deployed properly. This brought the P6 Solar Array to its fully extended length of 240 feet long by 38 feet wide, making it the largest solar array every deployed in space.

Astronauts Tanner and Noriega conducted the second spacewalk of the mission on December 5, 2000. This spacewalk lasted 6 hours, 37 minutes. Major activities included reconfiguring electrical connections to allow electricity to flow from the P6 Solar Array to ISS. The astronauts also prepared ISS Pressurized Mating Adapter-2 for its planned move to another location of ISS during a future Space Shuttle mission, moved an S-band antenna assembly to the top of the P6 Solar Array tower and released restraints holding a radiator to the tower’s side.

Astronauts Tanner and Noriega conducted the third and final spacewalk of the mission on December 7, 2000. This spacewalk lasted 5 hours, 10 minutes. The major objective of the spacewalk was to increase the tension of the P6 Solar Array wings by adjusting slack cables. The astronauts also installed a centerline television camera cable outside the ISS Unity Module to aid future Space Shuttle docking operations and installed a Floating Potential Probe (FPP) to the ISS exterior designed to measure the electrical intensity of plasma surrounding the space station. In addition, they attached an image of an evergreen tree to the FPP to symbolize the “topping out” of ISS, installed a radiator sensor and performed a photo survey of the ISS exterior.

At 9:36 a.m. EST on December 8, 2000 the final hatch was opened between Endeavour and ISS, allowing the STS-97 crew to be greeted by the ISS Expedition One crew of Bill Shepherd, Yuri Gidzenko and Sergei Krikalev. After an official welcoming ceremony, the crews performed structural tests of ISS and its solar arrays, transferred equipment and supplies and tested a television camera cable installed during the third spacewalk of the mission. Hatches between ISS and Endeavour were closed at 10:51 a.m. EST on December 9, 2000 for a total stay of the STS-97 crew aboard ISS of 25 hours, 15 minutes. Endeavour undocked from ISS at 2:13 p.m. EST on December 9, 2000 after a total docked time of 6 days, 23 hours, 13 minutes. Undocking was followed by a one-hour, tail-first flyaround of ISS by Endeavour. 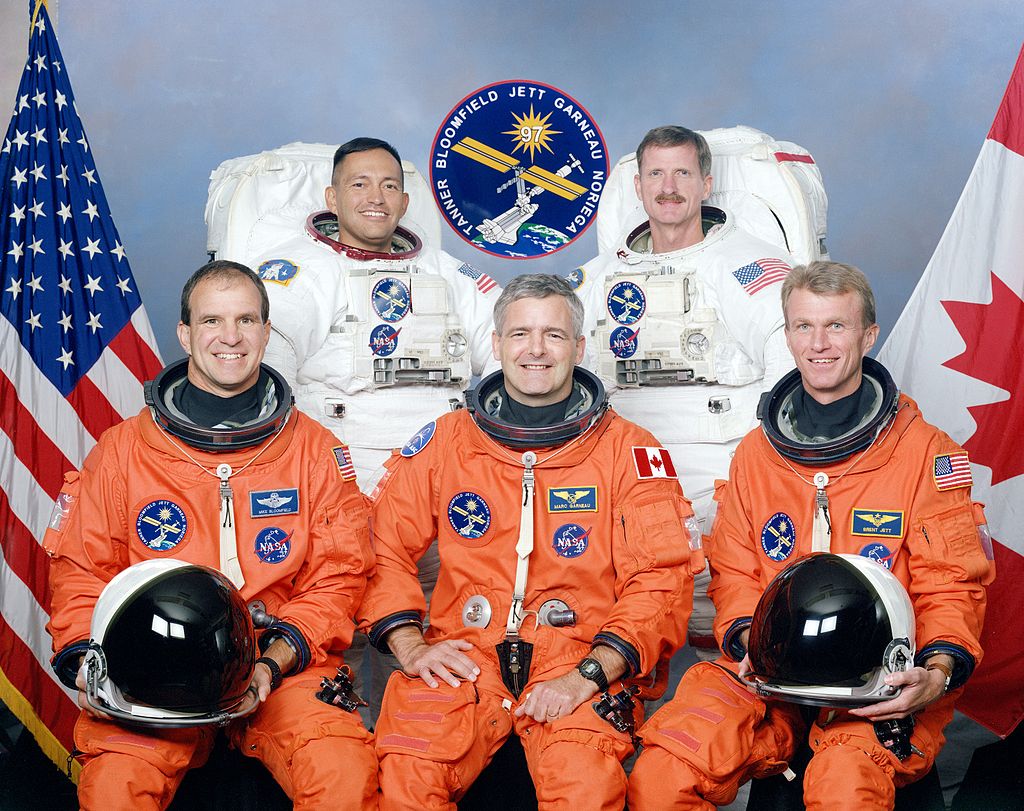 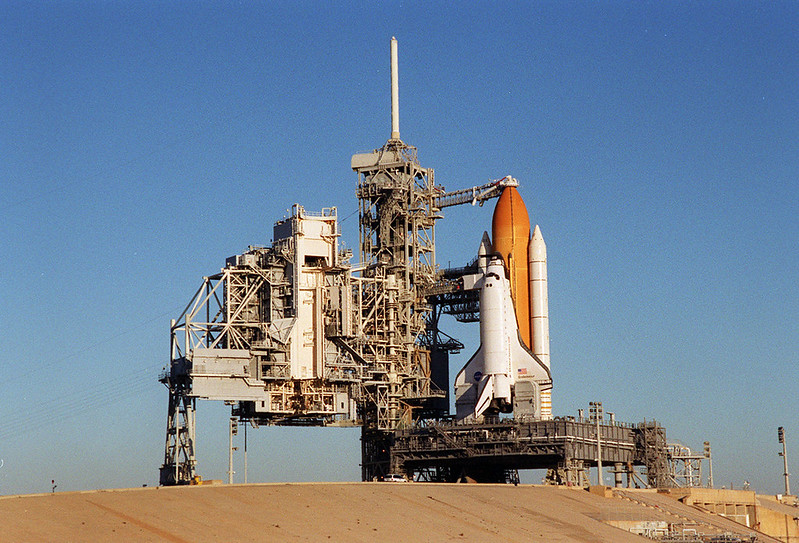 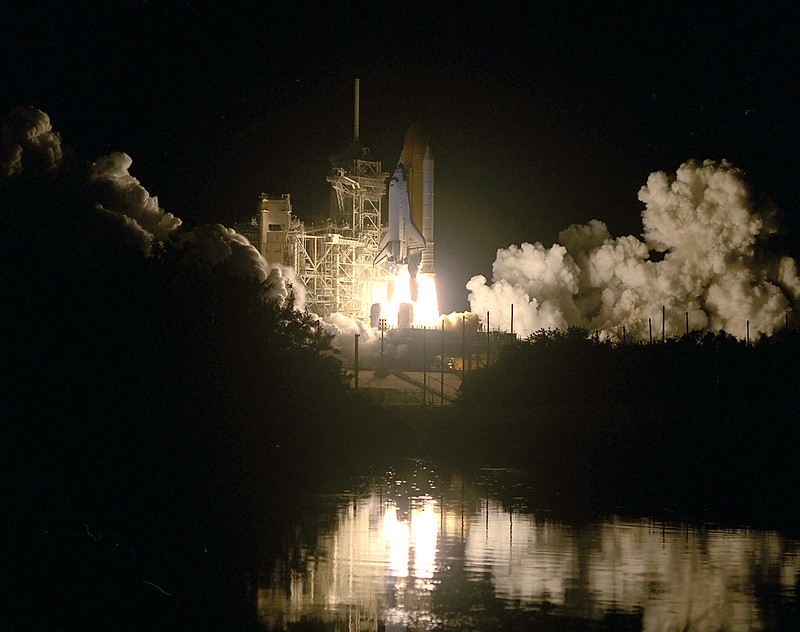 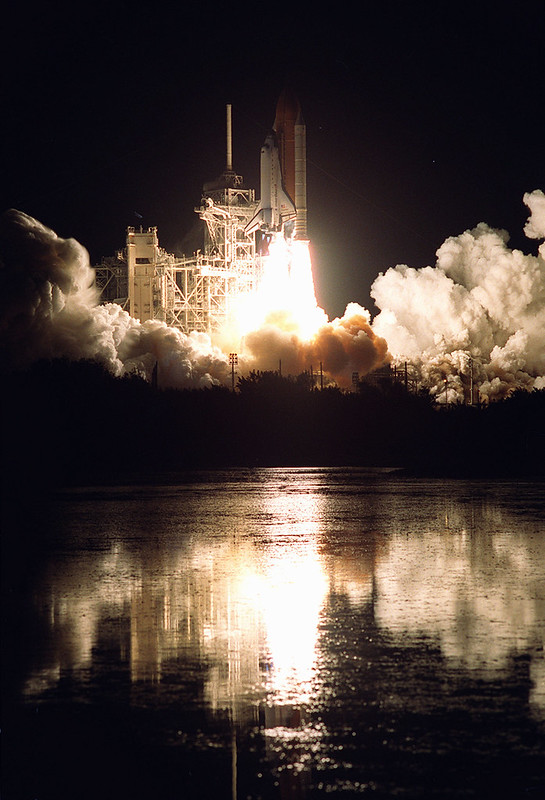 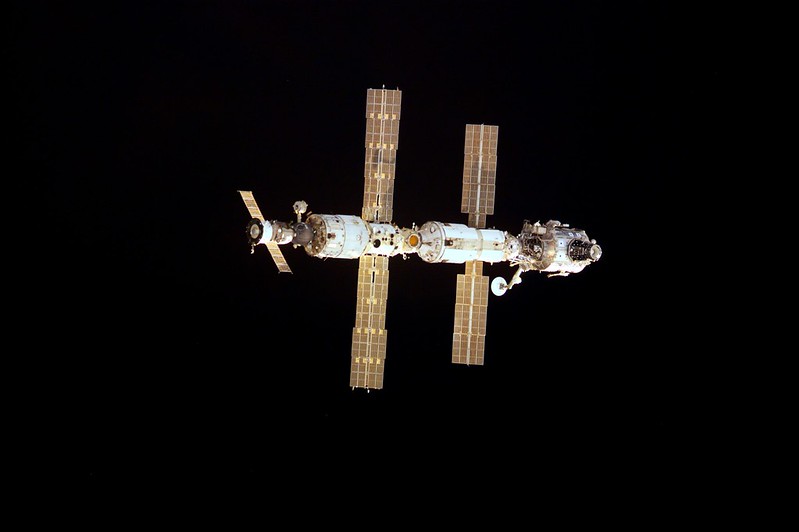 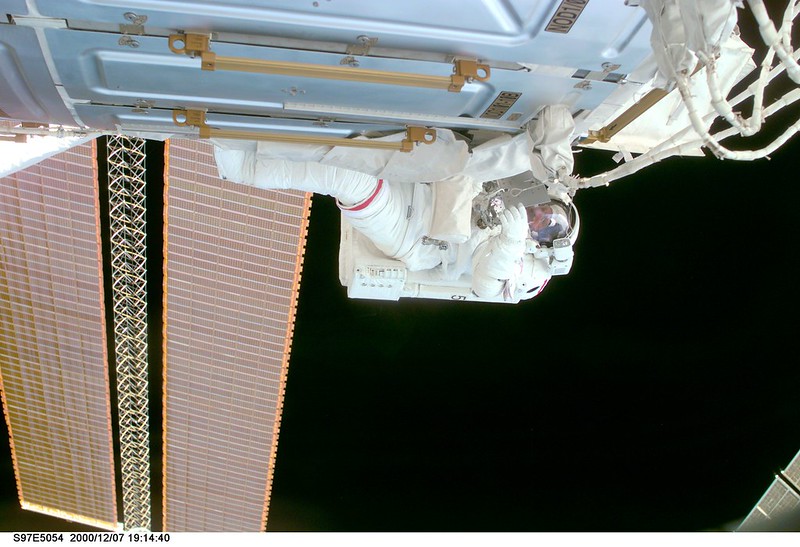 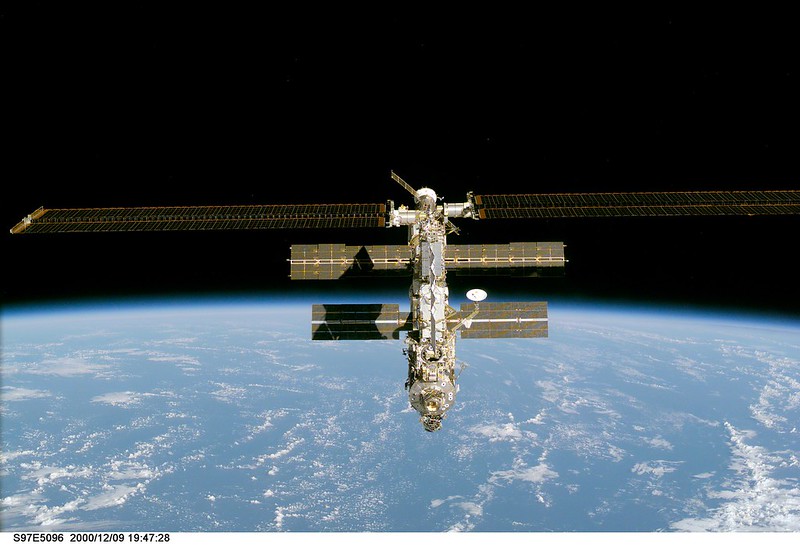 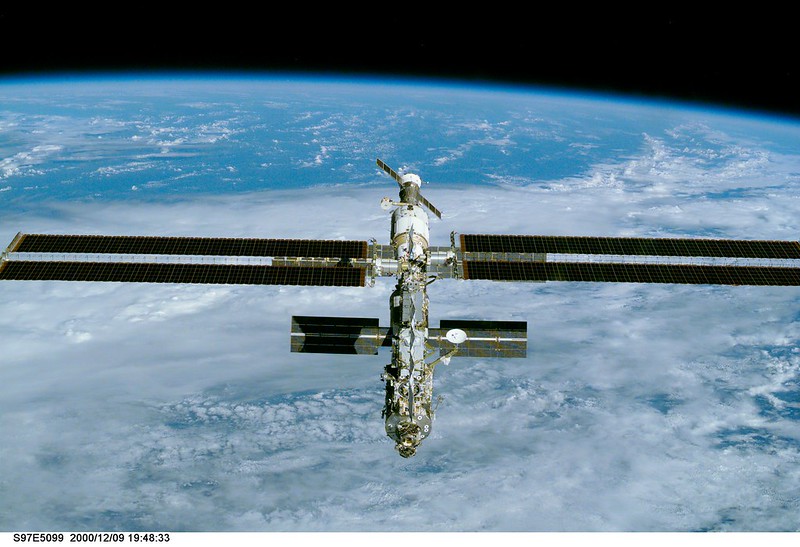 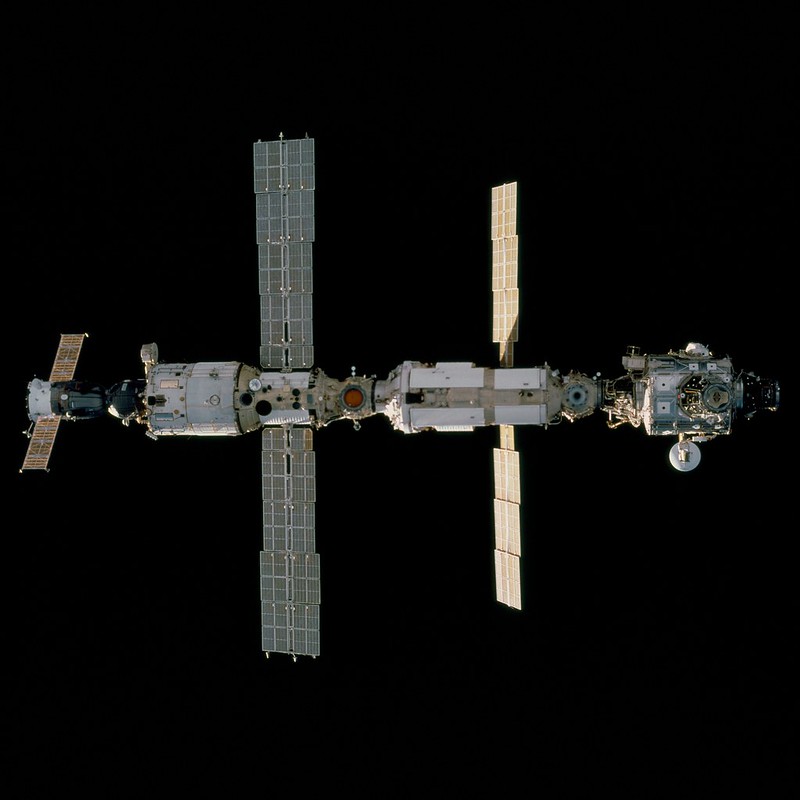 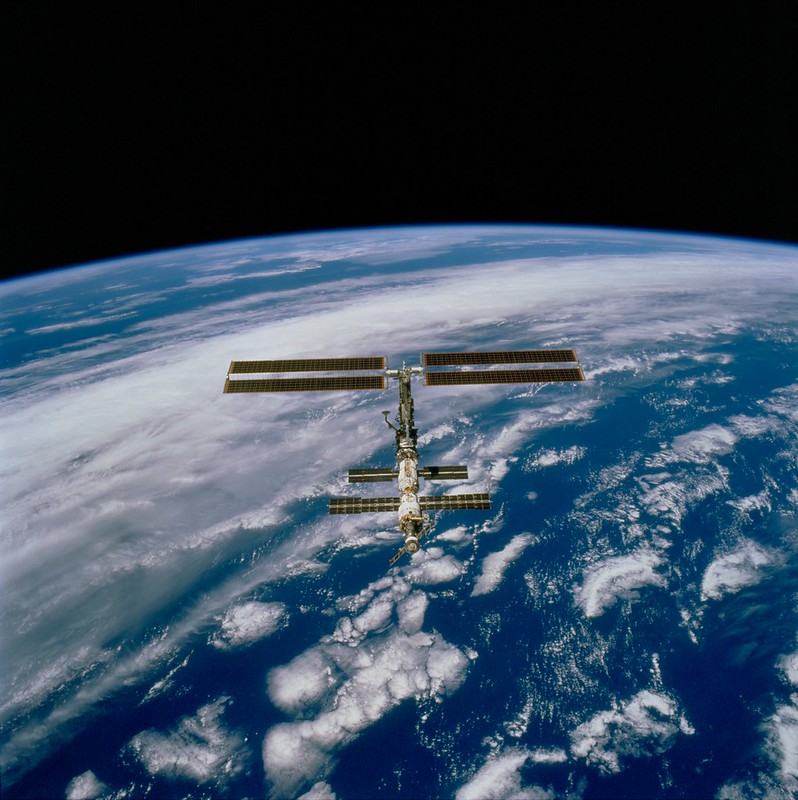 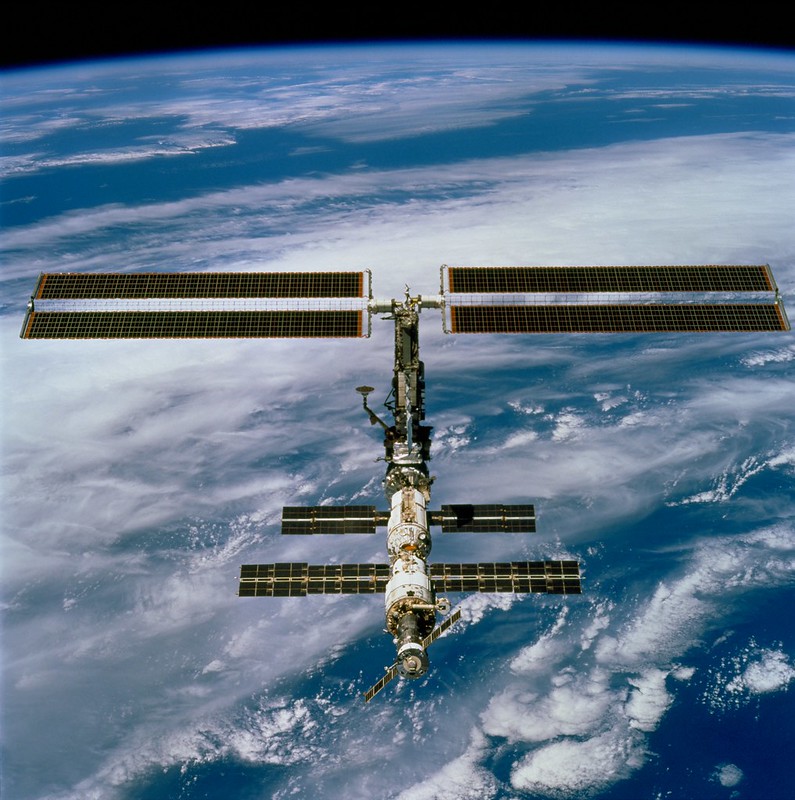 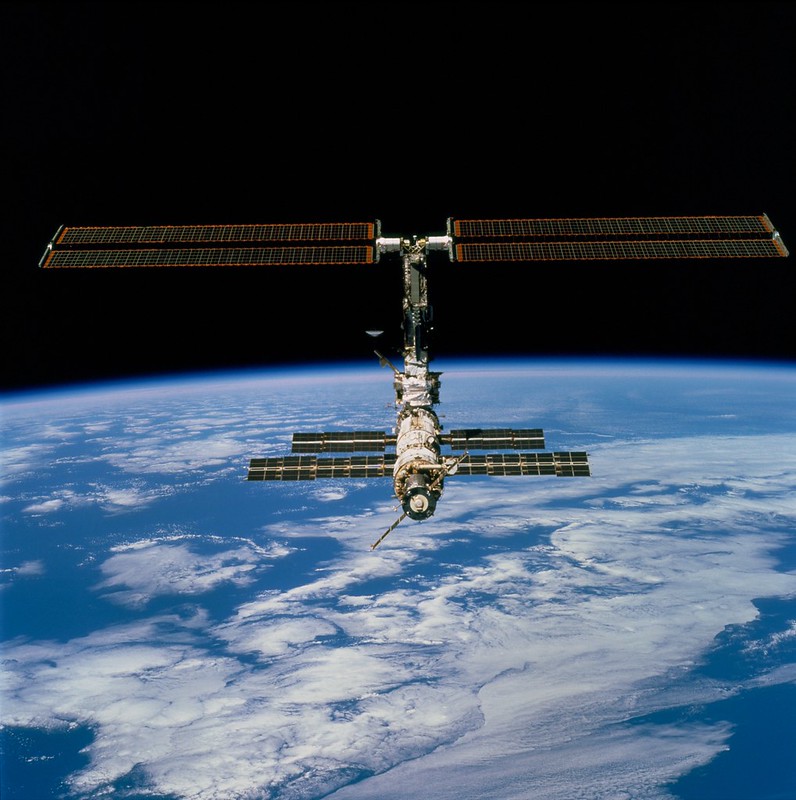