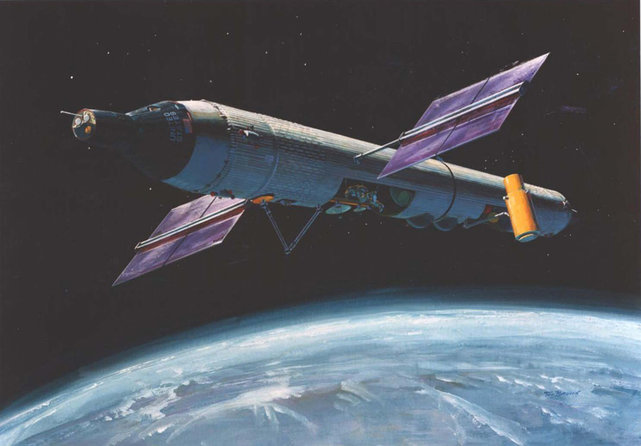 Feasibility studies for MOL began in 1960, and the program was officially acknowledged by Secretary of Defense Robert McNamara on December 10, 1963. Ironically, this was the same day that McNamara officially axed the X-20 “Dyna-Soar” program.

Air Force plans called for MOL to be launched and operational by 1971, with overall development assigned to McDonnell Douglas. MOL was envisioned as a laboratory module about 14 feet long by 10 feet in diameter. The laboratory module would provide a crew of two astronauts with a shirt-sleeve working environment.

The laboratory was to be attached to an unpressurized equipment module that would house necessary support hardware. The equipment module was designed to be accessed by the MOL astronauts as they wore protective spacesuits.

Astronauts were to be ferried to and from the MOL by a modified Gemini capsule called the Gemini-B. The Gemini-B incorporated a hatch in the aft heat shield that would be mated to a crew transfer tunnel on the MOL.

Both the MOL itself and subsequent Gemini-B capsules were to be launched atop modified Titan III boosters called the Titan III-M. Operational MOL missions were to have been launched from Space Launch Complex 6 (SLC-6, or “Slick-6”) at Vandenberg Air Force Base, California.

In addition to carrying out a number of scientific observations, it is quite obvious that astronauts would have taken advantage of the planned MOL polar orbit to carry out spy observations of the Soviet Union. This is one of the reasons the MOL program was shrouded in secrecy during its early development.

Since it involved manned space flight, the MOL program required its share of Pilot Astronauts. Requirements for MOL Pilot Astronauts were quite similar to those of NASA Pilot Astronauts. Candidates were required to be not taller than 6-foot and be born not earlier than December 1, 1931. However, no civilians were permitted to apply.